The first Triple-E has a name 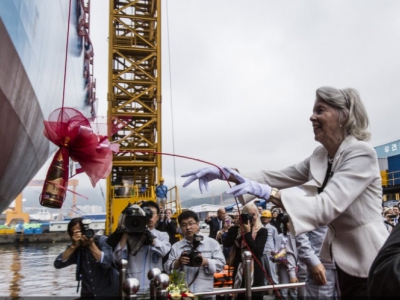 During the official naming ceremony held in Okpo today, South Korea,Ane Mærsk Mc-Kinney Uggla who is the chairman of the Moller Foundation, had the honour of naming the first vessel.

Maersk Line’s newest vessel, the first of the Triple-E series, was named Friday morning in a ceremony at the Daewoo Shipbuilding & Marine Engineering (DSME) shipyard in Okpo, South Korea. It bears the name of the late Mærsk Mc-Kinney Møller, who passed away in April 2012 at the age of 98.

Maersk Line CEO, Søren Skou, began the ceremony by welcoming all the special guests and recounting the important tradition of naming ceremonies in Maersk ever since the first event in 1906 welcomed Peter Mærsk as the second vessel in the fleet.

“I name you Mærsk Mc-Kinney Møller,” she said.

“As you sail the waters of the world, may your journeys be smooth and your tasks successful. May you bring happiness to your crew, may you be a safe haven for all who board you and may you bring pride and prosperity to all. I wish you Godspeed!”

The Mærsk Mc-Kinney Møller is the largest ship in the world, and along with the other 19 Triple-E vessels on order from DSME, sets new standards in the container industry, not just for size, but also of energy efficiency and environmental performance. With unique design features for slower speeds and maximum efficiency, this vessel will emit 50% less CO2 per container moved than the current average on the Asia-Europe route.

The 20 Triple-E vessels will be phased in gradually over the next couple of years on the existing route between Asia and Northern Europe (AE10).

Also view video of the christening ceremony by clicking here