The Ever Forward containership at Chesapeake to be unloaded 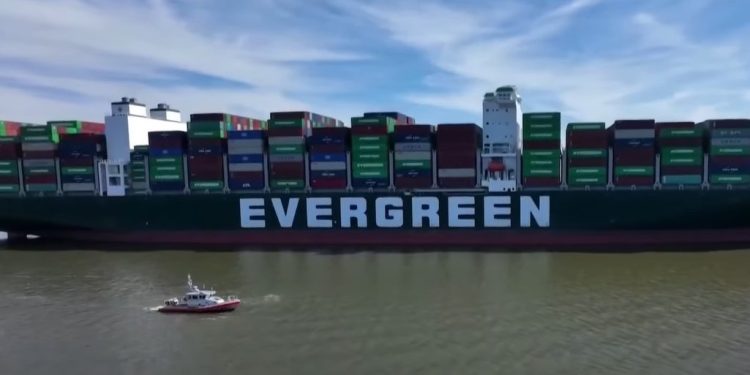 After many failed attempts to refloat the containership at Chesapeake Bay, the revised plan for the Evergreen Marine-owned containership, Ever Forward, which run aground 3 weeks ago, is to unload the containers from the cargo ship.

To remind, the 12,000 teu Ever Forward remains stuck in Chesapeake Bay, after departing the Port of Baltimore Seagirt Terminal on a Sunday night, three weeks ago.

Currently, after several failed attempts, a revised plan to refloat the Ever Forward is under consideration, since dredging around the vessel and dislodging it with the tugboats, seemed to be unsuccessful.

At present, over the next weeks, the authorities will try unloading the containers from the cargo ship. In order to do that, the Coast Guard will install 2 tall crane barges to help remove the containers. After that, the pull barges and the tugboats will make another attempt to refloat the vessel.

As informed, the containers will be removed in daylight hours only for safety purposes from both the port and starboard sides and placed on receiving barges. Subsequently, these barges will shuttle the containers back to their original onboarding facility, Seagrit Marine Terminal in Baltimore, where they will be offloaded by shore-based handling gear.

According to the U.S. Coast Guard, the best thing to do, is a lightering operation of the containership, noting however that this revised plan could take another 2 weeks to be executed.

As for the shipping channel, it will remain open to one way traffic during these operations. What is more, a 500 yard safety zone around the ship in Chesapeake Bay will continue during this operation. The safety of persons involved in the salvage operation, the integrity of the marine environment and any potential signs of pollution are a priority.

To assist in this situation, a naval architect and salvage master have been appointed in order to remotely monitor an installed sensor system and evaluate the ship’s stability and integrity.

Last week, the company declared a General Average statement, noting that “In light of the increasing costs arising from the continued attempts to refloat the vessel, Evergreen declared General Average”.

It is worth noting that last year in 2021, after the re-floating of the Ever Given in the Suez Canal, the owners of the ship had also declared a General Average. Precisely, specialist rescue teams had managed to freed the ship after almost a week, after extensive dredging and repeated tugging operations.