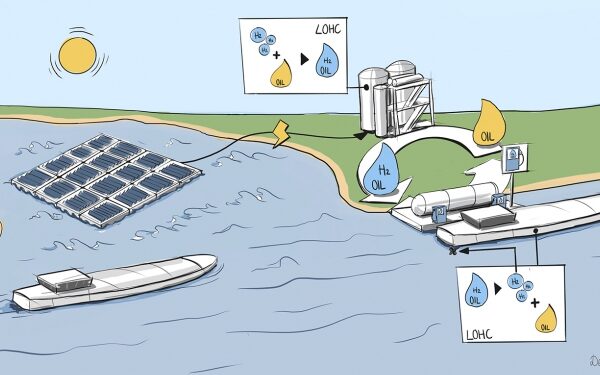 In an effort to boost sustainability within inland shipping, SolarDuck and Voyex joined their forces to develop a solar island on the Waal near IJzendoorn, a first in the Netherlands. Under their collaboration, partners have set up an R&D partnership, which seeks to enable emission-free sailing on hydrogen.

As informed, a solar island will soon be on display as a test set-up on the Waal near IJzendoorn. In fact, the Province of Gelderland supports this innovation with a subsidy of € 350,000, while Dekker Group facilitates on the spot.

“Our floating sand factories have already been made much more sustainable, but we are still looking for a solution for our shipping.We wholeheartedly support the innovation of SolarDuck and Voyex, in the hope that it will contribute to making inland shipping more sustainable.”

“The floating solar island, which produces 65 kilowatts of peak power, is connected to a 10 kilowatt electrolyzer that produces hydrogen. The hydrogen is coupled to a ‘Liquid Organic Hydrogen Carrier’ (LOHC), an oily liquid that serves as a carrier for the hydrogen. This ‘hydrogen oil’ can be transported at room temperature, under the same atmospheric conditions as diesel, for example”.

What is more, the initiative is named ‘The Atoll’, referring to the film ‘Waterworld’, in which an artificial island provides for its own energy needs.

Both companies have the long-term ambition to use floating solar islands at sea to produce hydrogen for shipping and other heavy applications, each from its own point of view.

Concluding, the total size of the project is approximately 1,000,000 euros. The province of Gelderland awarded this a subsidy of 350,000 euros.