In order to align with the EU Green Deal objectives, the forthcoming review of the Trans European Network for Energy (TEN-E) Guidelines must recognize the central role of ports in Europe’s new energy systems, ESPO said.

The statement comes as the European Commission is expected to publish its proposal for reviewing the TEN-E Guidelines Regulation of 2013 within December.

As European ports, we welcome the upcoming review of the TEN-E network and are excited to help Europe on the path towards a net-zero energy network by 2050. Nonetheless, we stress the need for the European Commission to recognise ports as key actors and partners in the energy transition. There are a huge amount of activities in ports that enable clean energy, from production and storage to import and hinterland distribution. We therefore urge the Commission to make sure they recognise the important role of ports,

According to ESPO, Europe’s Ports are particularly important in the development of the hydrogen economy: From production and storage facilities to fueling, recharging and distribution, ports will need to invest heavily to support the ramp-up of hydrogen in Europe.

This extends to imports and related facilities, alongside facilities to convert offshore renewable energy into green hydrogen, a prerequisite for the hydrogen economy to reach European Green Deal aims.

The retrofitting of pipelines and LNG infrastructure will not be enough to serve the needs of the new hydrogen economy. Therefore, a dedicated section on hydrogen should be included in this revision (either as a chapter or annex) to allow for the construction of interconnected hydrogen pipelines across Europe,

In addition, ports play a key role in the production and distribution of other fuels. This is not, however, recognised in the current TEN-E legislation, where few ports active in energy systems are included in the project corridors, ESPO stressed, underlining that this oversight cannot be repeated when hydrogen is included in the legislation. Ports’ role must be reconsidered in the context of the other energy carriers.

There are still needs for the development of LNG as a transitional solution before the development of zero or low emissions solutions. Other energy carriers are similarly important for industries located in the port cluster, from logistics and transport operators to mobility and heavy industry. Additionally, ports must develop green electricity infrastructure (from renewable sources including offshore wind, photovoltaic, ocean energy....) to ensure the production of green hydrogen,

In a separate statement, the Port of Rotterdam expressed its support to ESPO call to better recognize the important role of ports in Europe’s new energy systems, specifically with regard to hydrogen, stressing that the European Commission must support the necessary facilities and infrastructure in ports needed to accelerate the import, production, supply and transport of green hydrogen into Europe.

Adopted in 2013, TEN-E Guidelines Regulation 347/2013/EC aims to link energy infrastructures in the EU. Similar to the TEN-T network, the TEN-E legislation is based around 9 corridors relating to electricity, oil and gas and 3 thematic areas (where cross-border carbon dioxide networks are included).

The Commission began its revision of the TEN-E policy in early 2020 with one key motivation being to bring the legislation in line with the goals of the European Green Deal. 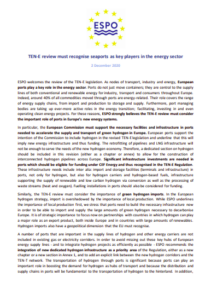