T&E: Europe, China and US could decarbonize 84% of maritime without IMO

84% of shipping traffic goes through Europe, China and the US, a new Transport & Environment (T&E) study shows. If these economies were to regulate ships calling at their ports, they could decarbonise the lion’s share of the industry and in doing so bypass the “ineffective” IMO, says T&E.

Singapore has a large number of emissions and comes in fourth with 7.19%, due to its role as a marine bunker hub. The following complete the top 10 emitting countries:

The results show that allocating emissions per voyage – as opposed to per flag, or where the fuel was purchased – accurately reflect countries’ trade patterns given that the largest economies come out top.

Nonetheless, emissions are not concentrated in a few countries. Together, China, the US and the EU do not together count for a majority of emissions, only 38.4%.

In this sense, it may appear as if regional policy would have limited impact unless implemented by a majority of countries. This may pose a concern for developing countries that lack the necessary administrative capacity to implement domestic clean shipping legislation

Finally, 84% of the fleet call either in Europe (UK and the EU), the US or China. In other words, together China, Europe and the US could decarbonise 84% of the global shipping sector if they implemented a zero emission mandate for ships calling at their ports.

Efforts to decarbonise shipping at the IMO have so far been miserable. The need for consensus at the global level has brought us nowhere. But there is a much easier way to do it. With the vast majority of ships passing through Europe, China and the US, these leading economies can unilaterally regulate emissions without relying on the ineffective IMO 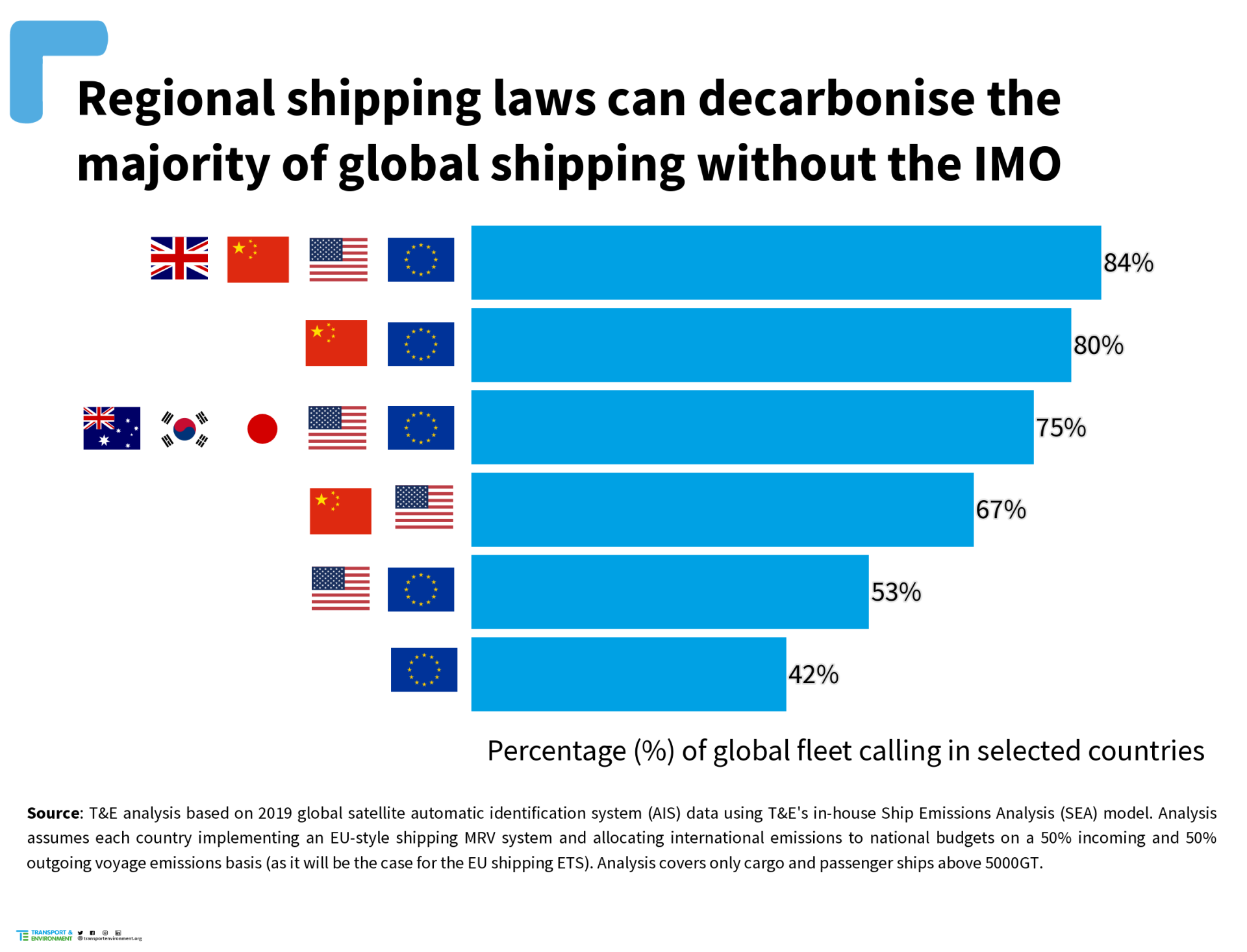 It should be noted that a zero-emission mandate in these countries may not immediately lead to decarbonisation of 84% of the fleet. This relates in part to the geographical scope chosen by each jurisdiction.

The European Commission, for instance, has only proposed to regulate 50% of emissions from international voyages. If the UK, China and the US replicate this approach, a significant amount of emissions would be addressed, but not the full 84% of the fleet that calls at those countries.

On the one hand, shipping companies could convert their ships and engines to zero-emission-ready fuels and technologies, but use ‘drop-in’ fossil fuels for unregulated voyages

Moreover, states may regulate a different geographical scope than the 50% scope proposed by the European Commission. Indeed, the EU itself regulates 100% of incoming and outgoing voyages under its Monitoring, Reporting and Verification (MRV) Regulation, while the European Parliament has proposed to regulate 100% of international voyages in the ETS from 2027 and both the European Parliament and the EU Council have proposed to regulate non-EU voyages, that is, voyages between nearby non-EU transhipment ports and other non-EU ports.