Port of Los Angeles issued the “By the Numbers: Jeopardizing the National Benefits of Trade through America’s Busiest Port Complex” report, highlighting that tariffs have a negative impact on jobs, income and tax revenue.

Accordingly, the so-long trade war between USA and China threatens about 1.5 million U.S jobs and more than $186 billion of economic activity throughout the whole nation

BST Associates collaborated with the Port of Los Angeles in order to analyze the degree to which waterborne trade moving through the San Pedro Bay ports is exposed to tariffs. Except the tarrifs’ impacts on the jobs and the economic activity, the tariffs also affect the operations at the port of Los Angeles and Long Beach, since the cargo volumes of Los Angeles Port had a 25% drop in ship calls, and a 19.1% decrease in volume this October in comparing with October 2018.

Every urban, suburban and rural community across our nation benefits from imports and exports moving through the San Pedro Bay ports, and ongoing tariffs are putting those benefits at risk. Some regions and industries are already feeling the pain, and the damage to jobs, income and tax revenue could be crippling down the road.+

In the meantime, Rufus Yerxa, the President of the National Foreign Trade Council, reported that the imposed tariffs had risen the costs for daily consumers of basic products up to 25%.

They furthermore have a negative impact on the competitive manufactures and farmers, since they are less competitive due to the fact that the production costs have increased and foreign retaliation decreases their exports.

It is now clear that a tariff war without sensible constraints is a lose-lose proposition for the vast majority of Americans.

…as stated by the President of the National Foreign Trade Council, Rufus Yerxa.

The taxes have been specifically heavy on the US agricultural sector, while a 26% to 51% of exports of 50 states are damaged by tariffs.

Some states impacted by the tariffs are: California, Illinois, Kansas, Nebraska, Iowa, Texas, Louisiana, Ohio, Arizona and Missouri. Within the last year alone, exports of U.S. animal products and feed dropped 10% year over year based on January through August of 2019 volumes.

Further costs in the range of $31 to $35 billion are going to be added, coming from consumers at the field of retail and American manufacturers who have to produce their own American-made products, without the aid of imported raw materials and components. As a result this situation has disadvantages for both U.S. business, workers, consumers and producers.

If cargo traffic out of the San Pedro Bay ports is declining because of tariffs it means America farmers and ranchers are hurting. 95% of the world’s consumers are overseas. But when tariffs cut off access to markets that are hungry for American livestock, grains, vegetables and other farm products, the economic pain reverberates from ports, to farms to Main Street businesses.

Concluding, the Port of Los Angeles plays a major role in the shipping trade industry and is considered to be the America’s premier port, while it facilitated $297 billion in trade during 2018. 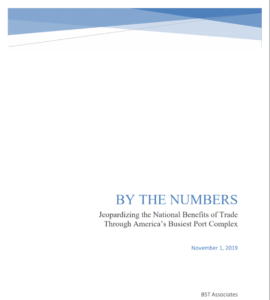