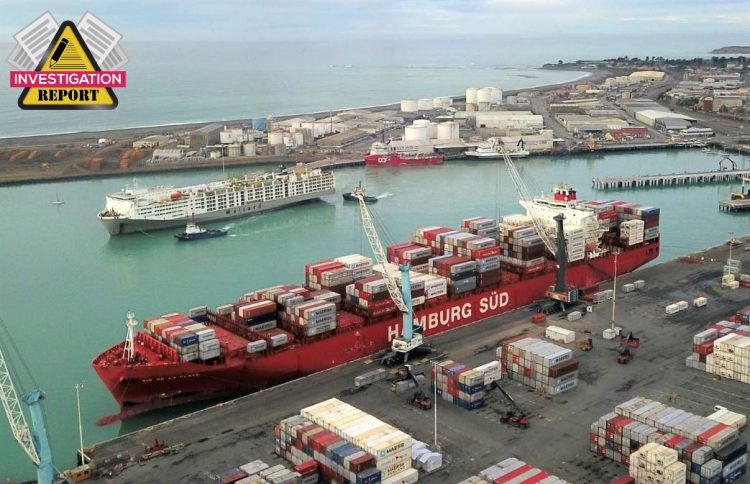 From Tauranga the vessel visited Napier and Lyttelton before arriving in Timaru on the evening of 11 November 2020.

At 0025 on 12 November 2020, the vessel was made fast at the Northern Mole berth in Timaru. The ship’s mooring configuration for its stay in Timaru consisted of four headlines and three stern lines, two forward spring lines and two aft spring lines.

At 0118 on 12 November 2020, the vessel commenced cargo operations of loading and unloading containers. The port used two mobile cranes to work the cargo until 0930 on 13 November 2020 when one crane broke down and was removed from service. Cargo operations continued using the remaining crane.

At 0900 on 14 November 2020, the vessel completed cargo operations and recorded its last lift. At this time the engine room was given notice to prepare the engines for a scheduled departure at 1030 hours.

At 1010 on 14 November 2020, standby stations was called by the master and the crew started preparing the vessel for departure.

At about 1013, the pilot boarded the vessel. At 1025, the accommodation ladder was secured and the crew dispersed to their respective mooring stations.

When the vessel carried a deck cadet, they assisted the forward mooring team, increasing the available crewing from three members to four. This was the case until about four weeks before the accident when the deck cadet signed off from the vessel.

At about 1028, the tugs were reported as secured on the starboard bow and at the stern. The master then gave the order to start unmooring.

The AB seaman positioned himself at the port side remote control station and took control of the mooring winches, while OS1 and OS2 (injured person) took up their positions near winch M1 and winch M2, respectively. From this position the AB did not have a direct line of sight of the two OS’s when they worked close to the winches.

At about 1029, three of the four headlines were lowered to the water by the AB and two were cast off by the harbour linesmen.

OS1 signalled to the AB to start operating the winches and retrieve the two ropes that were cast off. The winch M1 and the winch M2 were operated to pick up both the ropes simultaneously.

OS1 and OS2 watched the ropes coming in and manually guided them, making sure they were correctly stowed on their respective drums. The AB stopped the winch when both the ropes were clear of the water line and then instructed OS1 and OS2 to start retrieving the other two ropes.

Just before commencing the retrieval of the next two ropes, OS2 attempted to adjust the mooring rope on the winch drum and hand signalled to the AB to operate winch M2 at a slow speed. This was so the mooring ropes could be adjusted as they were wound onto the drum, to ensure correct storage.

At about 1031, OS2 at winch M2 signalled ‘STOP’ by raising his hand and fell to the deck. OS1 at winch M1 who was facing the other way heard a scream and turned around to see OS2 lying on the deck with injuries to their face. The AB at the winch controls stopped the operation immediately and went to investigate.

When the master instructed to let go the ropes, the forward mooring team lowered the ropes and the shore linesmen cast them off. The forward team picked up two ropes at a time by operating mooring winch M1 and M2 simultaneously. The AB was positioned at the winch controls on the port side and (near mooring winches M1 and M2, respectively) OS1 and OS2 were watching and guiding the ropes onto the storage drums.

When the ropes were clear of the waterline both OS1 and OS2 proceeded to make final adjustments to stow them correctly on the drums of the respective winches. To complete this task, OS2 had bent down and was manually guiding the rope onto the drum. While bending down to complete this task, OS2 was out of the line of sight of the winch operator who was positioned at the control station on the aft port side of the forward deck.

OS2 communicated with the winch operator, by raising their right hand and making hand signals over the top of the drum, while still bent down to physically adjust the rope. OS2 was doing two jobs at the same time, while out of sight from the winch operator.

It is likely that OS2, while completely engaged in communicating and handling the rope, had reduced situational awareness of their own safety and stepped too close to the winch drum. This made it possible for their left hand to get trapped between the rope and the winch, resulting in them being dragged into the storage drum.

OS2 was wearing two sets of gloves that day – a tight-fitting inner glove and a loosefitting ‘astro flex blue’ rubber glove on top. The left-hand loose-fitting astro flex blue outer glove was found stuck between turns of stowed rope on the winch drum. It is possible that OS2 may have escaped from more severe injuries as they were able to free themselves from the outer loose-fitting glove.