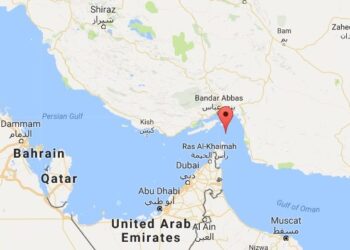 Strait of Hormuz the world's most secure shipping region

The Strait of Hormuz in southern Iran is the world's most secure region for shipping, according to Iran's representative to IMO. These remarks were made by Mr. Mohammad Rastad on Tuesday, on the sidelines of IMO's 30th Assembly session, at IMO headquarters in London.

They trapped underwater while installing an underwater oil pipeline The bodies of eight of the thirteen divers trapped underwater have been recovered, according to Iran's official news agency. There is no word on the remaining divers.The divers - 7 Indians, 5 Iranians, and 1 Ukrainian - were part of a team installing an underwater oil pipeline. They were operating inside a pressurized diving chamber when their Koosha-1 ship sank in the Persian Gulf Thursday afternoon. The chamber was onboard the ship at the time wand the divers were inside - to avoid having to pressurize and depressurize for each dive.Officials say stormy weather was in the area when the nearly 3 decade old offshore support vessel sank, just 15 miles from Iran's coast.Six of the bodies recovered were found in the diving chamber that became trapped underwater. All six were Indians. Iran's official news agancy reports that two more bodies were recovered at the depth of 72 meters. Sixty of the 73 people onboard the vessel were rescued.The Koosha-1 is owned by the Iranian company, Darya Koosh Co. and operated by the UAE based, Simatech Shipping & Forwarding.Source: Maritime Executive