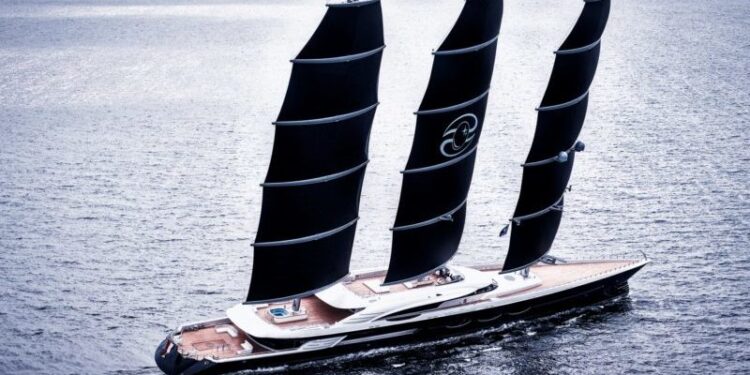 The huge sailing yacht ‘Black Pearl’ made headlines in recent months, not only for claiming the title of the largest sailing superyacht in the world, but also for featuring hybrid propulsion system and waste heat recovery. Analysts suggest the development of the Black Pearl reflects a growing trend and demand for large yachts to be more environmentally friendly.

Completed in 2018, the vessel is a result from successful collaboration on the part of an international group of designers, engineers, naval architects, builders, and project managers, Oceanco, the builder, said. All 2,900 square meter of sails of the vessel can be set in 7 minutes.

Namely, Black Pearl is designed to generate electricity to power its on-board systems, by using its propeller as a turbine as the yacht is propelled by the wind. Under sea trials Black Pearl achieved 20 knots of speed on the water, and its developers expect that it will be able to transit the Atlantic using no fuel.

Other mega-vessels designed to reduce fuel consumption in recent years include the 83.5m (273 feet) Savannah, reported to be the first diesel-electric hybrid super yacht with a number of engine modes including fully electric from its banks of lithium-ion batteries.

More recently, new green boats to hit the water include the world’s first hydrogen-powered Energy Observer and a series of solar catamarans designed by Swiss firm, Silent Yachts, according to CNN.

All these come in line with an overall shift of shipowners towards green practices, under the general awareness and stringent environmental regulations.

In the same context, a group of industry professionals have joined forces to set up the Water Revolution Foundation (WRF), which seeks to encourage greater sustainability across the supply chain.

Robert van Tol, executive director of the WRF, told CNN that the superyacht industry is sensitive to the desires of its customers, but being environmentally responsible, he stresses, is simply ‘the right thing to do’.

According to Mr. van Tol, the possibility of new technologies being discovered by deep-pocketed owners can then be shared with the wider marine world.