In its July 2019 Short-Term Energy Outlook (STEO), the US Energy Information Administration (EIA) expects Henry Hub natural gas spot prices for June, July, and August this year to average $2.37 per million British thermal units (MMBtu). If this happens, this price would be the lowest summer average Henry Hub natural gas price since 1998.

In the July STEO, EIA changed its forecast for 2019 Henry Hub natural gas prices down from the June STEO, after three months in a row of price reductions. Prices in June averaged $2.40/MMBtu and have fell by 19% since March.

Spot prices at key trading hubs across the country have traded near to the Henry Hub basis. Prices at the Transcontinental Pipeline Zone 6 trading point for New York City and the Chicago Citygate were both at $2.12/MMBtu, the lowest June average price and a fall of 25% and 23%, respectively, from June 2018.

Between April and June, the total net injections into underground storage fields have surpassed the five-year average by 41%, cutting the current five-year average deficit by over 300 billion cubic feet (Bcf).

Moreover, the lower price forecast indicates EIA's updated assessment of US drilling activity and average well productivity, both of which are higher than previously expected.

However, if summer temperatures are warmer than expected, electricity consumption, natural gas-fired electricity generation, and then natural gas prices could be higher than predicted. 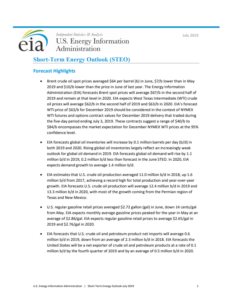