Microplastics are increasingly recognized as ubiquitous global contaminants, but questions remain regarding their source, transport and fate.

A recent study, documents the widespread distribution of microplastics in near-surface seawater from 71 stations across the European and North American Arctic, including the North Pole.

It also characterizes samples to a depth of 1,015 m in the Beaufort Sea. Particle abundance correlated with longitude, with almost three times more particles in the eastern Arctic compared to the west.

Polyester comprised 73% of total synthetic fibres, with an east-to-west shift in infra-red signatures pointing to a potential weathering of fibres away from source. The research suggests that relatively fresh polyester fibres are delivered to the eastern Arctic Ocean, via Atlantic Ocean inputs and/or atmospheric transport from the South.

This raises further questions about the global reach of textile fibres in domestic wastewater, with our findings pointing to their widespread distribution in this remote region of the world

The research also found that fibres in the eastern Arctic were three times more abundan than the west. They were also 50% longer in the east, and their infrared signature more closely resembled commercial polyester.

The weight of evidence points to something most of us could not even imagine: that washing our clothes is contributing to the widespread contamination of the world’s oceans with microfibers — both synthetic and natural 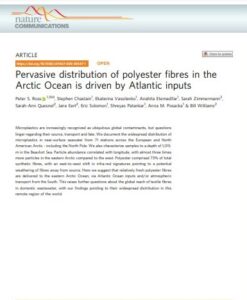