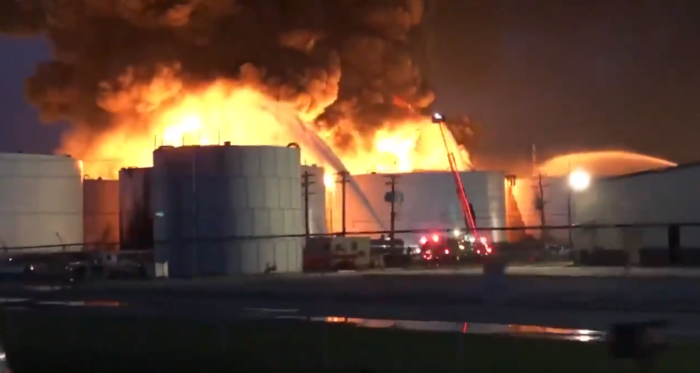 The fire started from a single tank, before quickly spreading to a second one. A day after the beginning of the fire,  seven of the 242 tanks were affected. However, according to local media, only six tanks were impacted, as the seventh one was empty.

In order to put out the fire, firefighters are using foam and water. They also hope that when the fire is contained, they will be able to close the tank valves, so as the fire to put itself out.

According to the latest information. one of the tanks contains naphtha and another xylene, both of which are components in gasoline. The latest tank that catch fire has toluene, which occurs naturally in crude oil and is used as a gasoline additive.

The other tanks includes gas blend stocks, which are used to produce finished gasoline, and base oil commonly used as machine lubricants.

Today, a cloud of black smoke still emanates from the petrochemical storage facility. Nonetheless, similar incidents are considered to be among the risks of life along the Houston shipping channel.

The cause of the fire is under investigation, with authorities saying that it could take until March 20 to put out the blazes in tanks filled with gas, oil and chemicals.

In addition, officials reassured the public that the plume of smoke has not affected air quality. In fact, air monitoring test results show that conditions are ‘below levels’ that could be considered problematic for human health.

What is more, all employees are accounted for, and no injuries have been reported.