In collaboration with Oceans Beyond Piracy, Stable Seas issued a report focusing on near-term actions to deter piracy and armed robbery incidents in the Gulf of Guinea.

Following a recent uptick in kidnapping incidents in the Gulf of Guinea that put seafarers and fishers at great risk, Stable Seas commissioned a range of stakeholders, led by the Senior Advisor Jon Huggins, to discuss near-term actions that could provide relief from violent attacks in the Gulf of Guinea.

The study identified cross-sector agreement on the threat level as a necessary precondition for success, in addition to reaching a common understanding of regional interpretations of maritime boundaries and their effect on international cooperation, private security schemes, and prosecution of detainees and a move from multilateral to multi-stakeholder cooperation.

Specific Recommendations from the report include:

It is important to note that some near-term efforts are already underway, including an initiative to better coordinate the shipping industry and Nigerian government security measures through the Nigerian government and Industry Joint Working Group (NIWG). 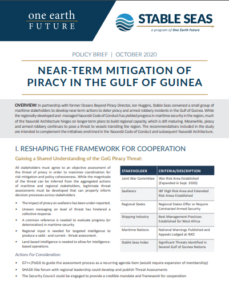