by The Editorial Team
in Regulation, Shipping 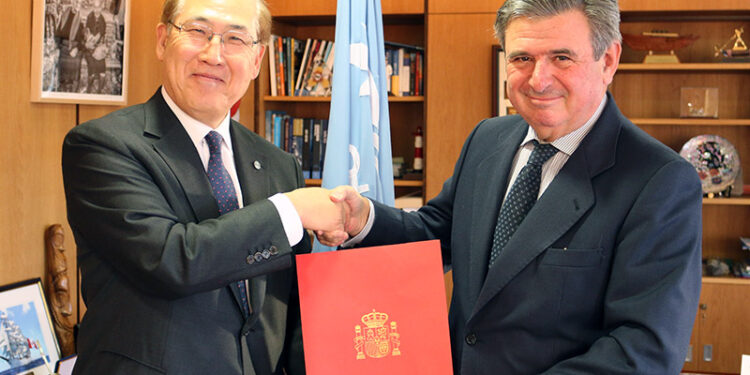 H.E. Mr. Carlos Bastarreche Sagües, Ambassador of Spain to the United Kingdom and Permanent Representative of Spain to IMO, deposited the instrument of accession to the Cape Town Agreement with IMO Secretary-General Lim.

With Spain’s accession we are approaching half way to reaching the entry into force criteria for this vital treaty. I urge other IMO Member States, who have not already become a party to the treaty, to follow suit. The Cape Town Agreement needs to enter into force so that we can fill the regulatory gap and have an effective international regime to address fishing vessel safety – and reduce fatalities in one of the most dangerous professions in the world,

International treaties such as SOLAS have been in force for many decades for commercial shipping, including cargo and passenger ships. However, many other SOLAS regulations provide an exemption for fishing vessels. The Cape Town Agreement fills the gap in international regulations by providing the necessary safety regulations for the fishing industry.

The Cape Town Agreement will enter into force 12 months after at least 22 States, with an aggregate of 3,600 fishing vessels of 24 m in length and over operating on the high seas, have become Contracting States.

With Spain’s accession, there are now 11 Contracting States to the Agreement, with an aggregate number of 1,413 fishing vessels of 24 m in length and over operating on the high seas. The Contracting States are:  Belgium, the Congo, Denmark, France, Germany, Iceland, the Netherlands, Norway, Saint Kitts and Nevis, South Africa and Spain.

IMO and the Government of Spain will co-host an IMO Conference on Fishing Vessel Safety and Illegal, Unreported and Unregulated (IUU) Fishing, in Torremolinos, Spain, tentatively scheduled for 21 to 23 October 2019.

The Conference will be followed by a meeting of the Joint Food and Agriculture Organization (FAO) /IMO Ad Hoc Working Group on IUU Fishing and Related Matters, pending approval by MEPC 74 and MSC 101.

Cape Town Agreement of 2012 on the Implementation of the Provisions of the Torremolinos Protocol of 1993 Relating to the Torremolinos International Convention for the Safety of Fishing Vessels, 1977 is an internationally-binding instrument not yet in force.

The Cape Town Agreement is one of four international treaties aimed at achieving higher levels of safety and better compliance and enforcement in the fishing industry, and the only treaty of the four yet to enter into force. The four treaties are: