The South African Maritime Safety Authority (SAMSA) issued a Marine Notice concerning the ships’ compliance with IMO Sulphur Cap 2020. SAMSA requires that all ships must provide information over their compliance with the environmental regulations through a revised MRCC Pre-Arrival Notification (PAN) report.

Acceptable methods of compliance with the Marpol Annex VI are considered to be the use of fuel oil (or LNG, Biofuels, blended products distillates) used on board with a sulphur limit of less than 0.5% m/m.

As the Standard Club informs, SAMSA also accepts the use of fully operational scrubbers in accordance with IMO guidance. However, in case of any breakdown or malfunction of the scrubber, a notification must be served on the authority and the ships will have to rectify the malfunction prior departure from the port.

In such a situation, the Port State Control officers are expected to investigate the issue thoroughly, including requiring sight of all relevant documents regarding the type of fuel oil on board, documents pertaining to the scrubbers, evidence that the ship’s personnel involved in the operation of the scrubbers are adequately trained and familiar with its operation.

It has been further highlighted that low sulphur fuel oil is available in the ports of Durban, Port Elizabeth, Cape Town as well as at offshore bunkering in Algoa Bay (off Port Elizabeth and Ngqura).

Moreover, draft legislation has been proposed, but not yet enacted, providing for MARPOL Annex VI to have the force of law in South Africa. In the event of non-compliance the applicable fines which have been proposed are in the amount of up to ZAR 3.2 million (approximately USD 220,000 at current exchange rates) and / or five years imprisonment. 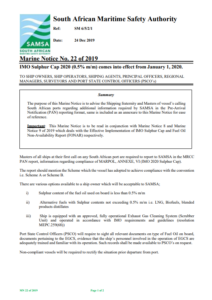