Solar PV market to grow remarkably in the next five years

The International Energy Agency (IEA) has recently issued its Renewables 2019 report with the aim to analyse and forecast renewable energy and technologies from 2019 to 2024; providing global trends and developments for renewable energy in the electricity, heat and transport sectors.

Namely, IEA suggests that the world’s total renewable-based power capacity will grow by 50% between 2019 and 2024. This increase of 1,200 gigawatts, equivalent to the current total power capacity of the United States, is driven by cost reductions and concerted government policy efforts.

What is more, solar PV accounts for 60% of the rise; with the share of renewables in global power generation set to rise the current 26% to 30% in 2024. The installation of solar PV systems on homes, commercial buildings and industrial facilities is set to increase over the next five years, transforming the way electricity is generated and consumed.

The report also views renewables in transport growing by an additional 20% through 2024 on the assumption of higher quota levels and enhanced policy support that opens new markets in aviation and marine transport. 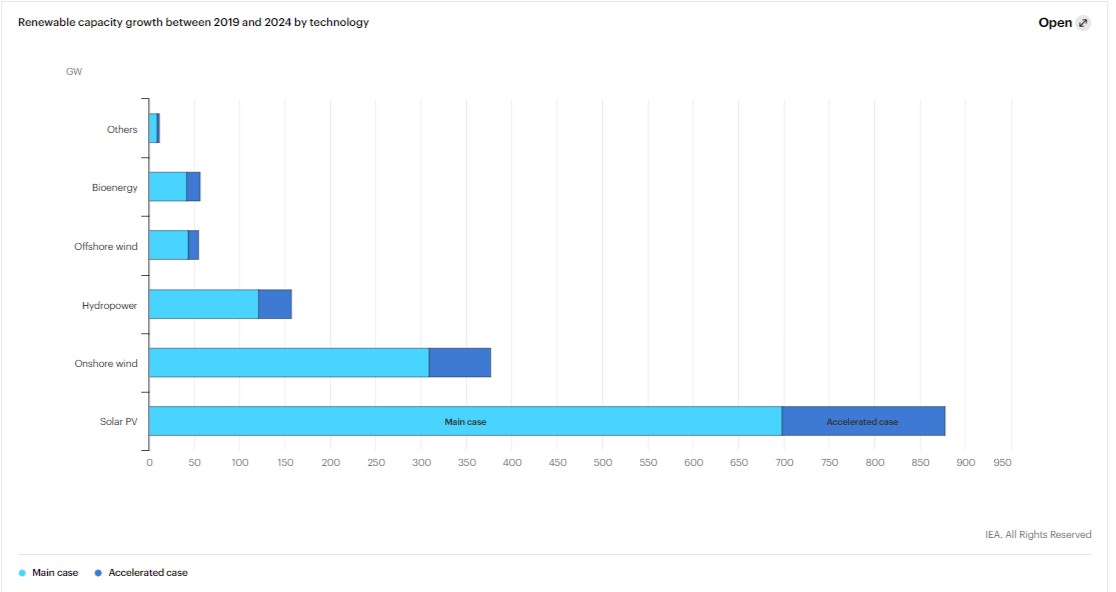 Moreover, renewable heat is set to expand by one-fifth between 2019 and 2024, driven by China, the European Union, India and the United States. The heat and power sectors become increasingly interconnected as renewable electricity used for heat rises by more than 40%.

It is said that overall, renewable heat potential remains vastly underexploited; the share of renewables in total heat demand is forecast to remain below 12% in 2024- calling for more ambitious targets and stronger policy support. 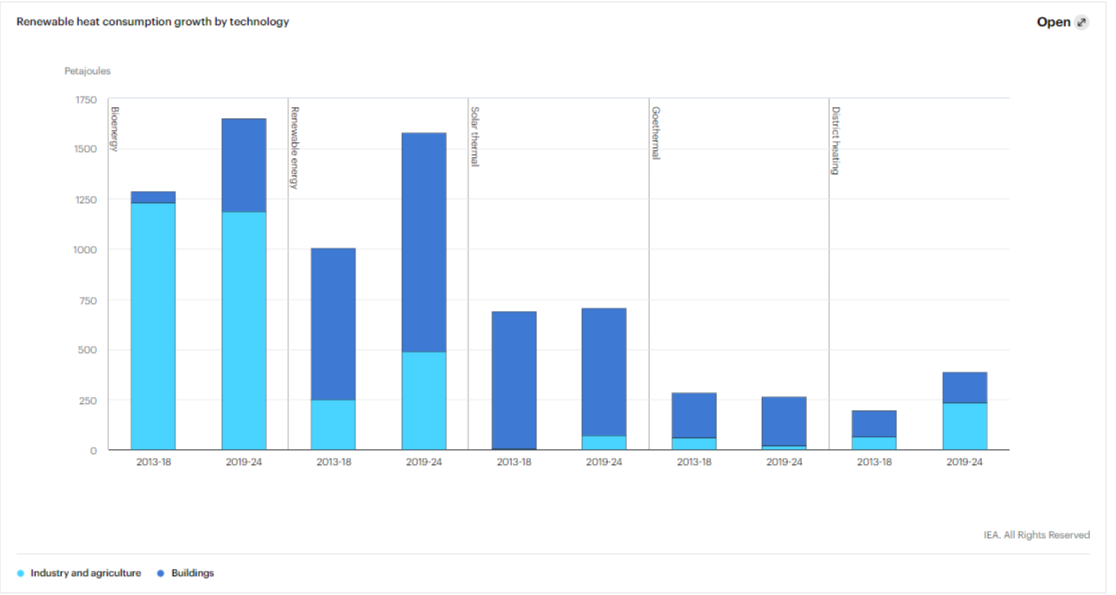 Biofuels currently represent some 90% of renewable energy in transport and their use is set to increase by 25% over the next five years. Growth is dominated by Asia, particularly China, and is driven by energy security and air pollution concerns.

Despite the rapid expansion of electric vehicles, renewable electricity only accounts for one-tenth of renewable energy consumption in transport in 2024. And the share of renewables in total transport fuel demand still remains below 5%.

Renewables are already the world's second largest source of electricity, but their deployment still needs to accelerate if we are to achieve long-term climate, air quality and energy access goals. 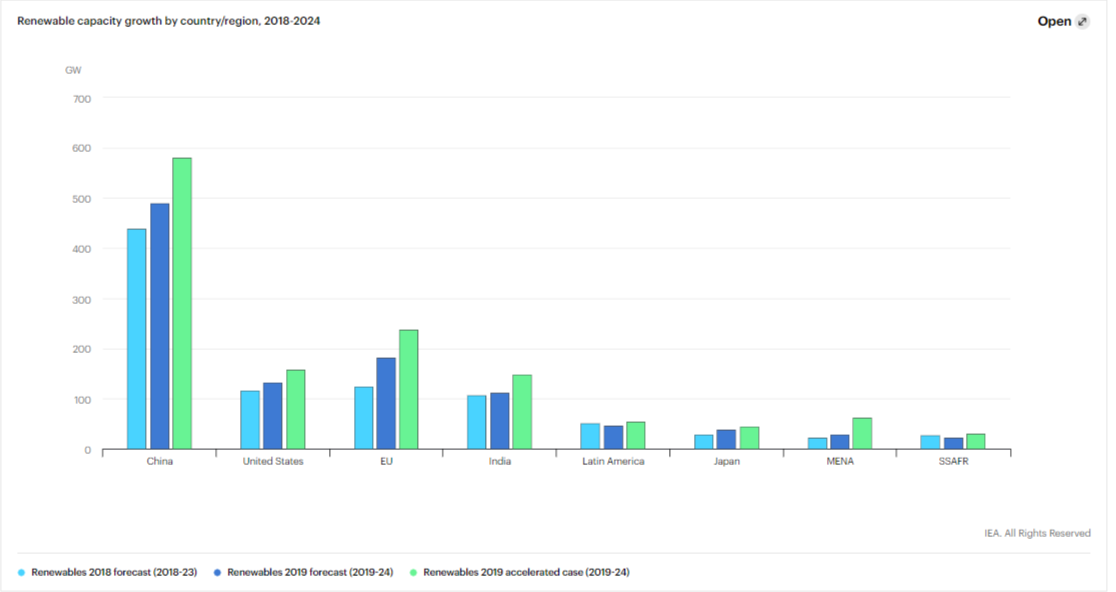 According to the fuel report, the three main challenges that need to be overcome to speed up the deployment of renewables are

Distributed PV accounts for almost half of the growth in the overall solar PV market through 2024. Commercial and industrial applications rather than residential uses dominate distributed PV growth, accounting for three-quarters of new installations over the next five years; this may be due to better economies of scale as well as better alignment of PV supply and electricity demand enabling more self-consumption and bigger savings on electricity bills in the commercial and industrial sectors.

On homes, solar rooftop systems are set to more than double to 100 million by 2024- with the top markets on a per capita basis to be Australia, Belgium, California, the Netherlands and Austria. 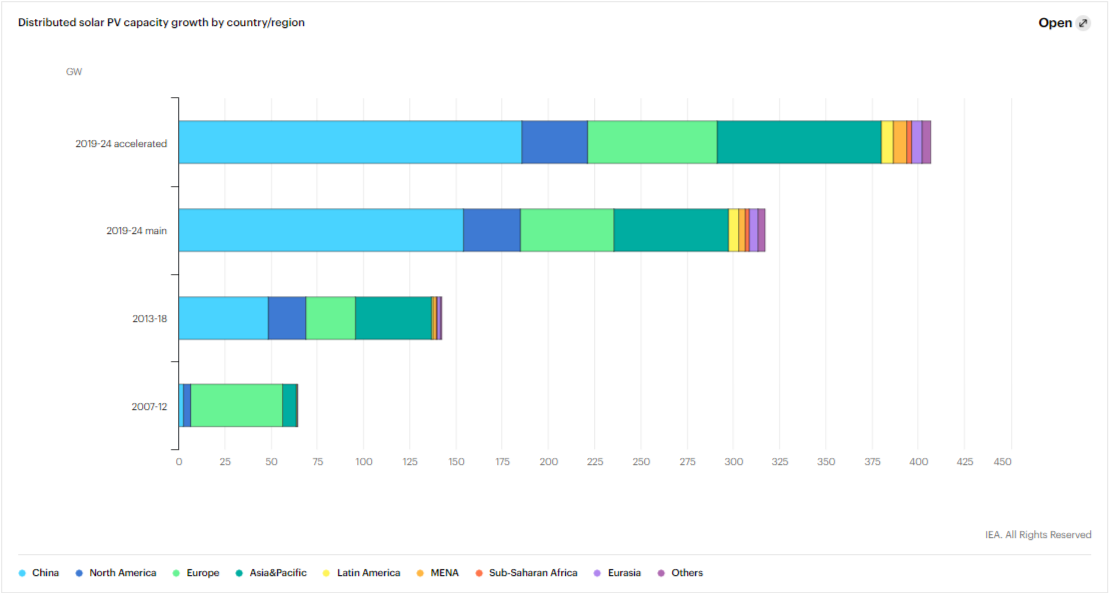 In relation to the cost of generating electricity from distributed solar PV systems, which is already below retail electricity prices in most countries, IEA forecasts that costs will decline by a further 15% to 35% by 2024, making the technology more attractive and spurring adoption worldwide.

Yet, there is mention that the important policy and tariff reforms are needed to ensure distributed PV’s growth is sustainable; unmanaged growth could disrupt electricity markets by raising system costs, challenging the grid integration of renewables and reducing the revenues of network operators.

By reforming retail tariffs and adapting policies, utilities and governments can attract investment in distributed PV while also securing enough revenues to pay for fixed network assets and ensuring that the cost burden is allocated fairly among all consumers.

Improving economics, policy support and more effective regulation could push distributed PV’s global installed capacity above 600 GW by 2024, and almost double Japan’s total power capacity as of today. Yet this accelerated growth is still only 6% of distributed PV’s technical potential based on total available rooftop area.

Distributed PV’s potential is breathtaking, but its development needs to be well managed to balance the different interests of PV system owners, other consumers and energy and distribution companies.

Recently, in its Offshore Wind Outlook 2019, IEA underlined an increase of 30% in the wind market between 2010 and 2018, which was achieved from technological developments and from the growth of offshore wind projects.

Specifically, the report highlights that Europe is leading the offshore wind development, with the UK, Germany and Denmark being the highlight of these developments. Yet, China added more capacity than any other country in 2018.

Despite the development in the sector, IEA states that today's offshore wind market doesn't even come close to tapping the full potential – with high-quality resources available in most major markets, given that the sector has the potential to generate more than 420 000 TWh per year worldwide.

To explore more about the IEA Renewables 2019 report, click here.