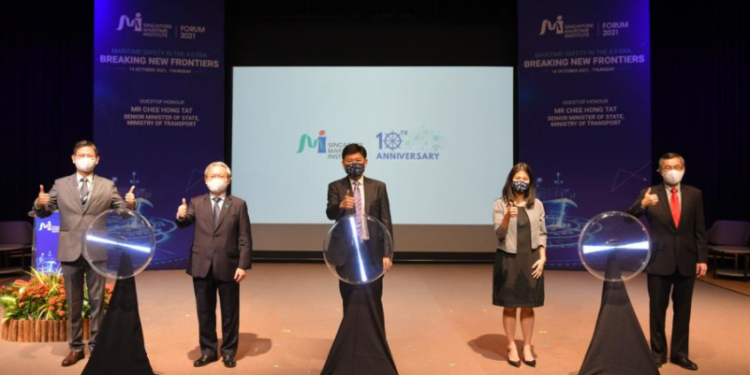 At the 11th Singapore Maritime Institute (SMI) Forum held on 14 October, Mr Chee Hong Tat, Senior Minister of State for Transport, announced that MPA will be allocating S$80 million of funding to support SMI’s R&D activities for the next five years.

The event was graced by Mr Chee Hong Tat, Singapore’s Senior Minister of State for Transport. In his opening address, Mr Chee outlined the key role of innovation, deep-tech and research in enabling Maritime Singapore to remain relevant and ahead in global competition.

To support SMI in pursuing its mission to grow Singapore as a leading global maritime research hub in Next Generation Port, Smart Shipping, and Green Technologies, Mr Chee announced that the Maritime and Port Authority of Singapore (MPA) will be allocating S$80 million of funding to support SMI’s R&D activities for the next five years, from 2022-2026.

This is in addition to funding under the Maritime Transformation Programme provided by NRF in 2019 that is managed by SMI.

Throughout the past ten years, SMI had worked closely with the industry and research community both in Singapore and overseas. These international collaborative initiatives with strategic overseas research organisations further enriched and facilitated impactful global R&D exchange and open innovation with our Centres of Excellence. We shall continue to deepen our bilateral R&D relations with our existing international research partners and forge new ones to expand our knowledge frontiers and global R&D network.

At the event, Mr Chee also witnessed the inking of several Memorandums of Understanding (MoUs):

MoU on R&D Collaboration between CEMS and Wärtsilä Voyage Pacific

Wärtsilä Voyage’s comprehensive collaboration with CEMS covers assistive technologies for use on-board ships and during training, simulators to study human behaviour and competency to enhance the safety of navigation, infusing wearable technologies. It also covers the development of training guidelines and contents for remote operations. Lastly, scenario-based “Standards Validation” simulation for autonomous vessel research will also be an area to support Singapore’s pursuit in Maritime Autonomous Surface Ship development. The projects are scheduled to be implemented over the next two years.

SMI and three industry partners, Kongsberg Digital AS, RightShip and Wärtsilä Voyage Limited, signed MoUs today to cooperate on a Maritime Artificial Intelligence (AI) R&D programme. Recognising the need to create an environment to promote data-driven innovation, and to drive increased use of data-driven tools, applications, and technologies in the maritime industry, SMI will collaborate with the various MoU parties to catalyse Maritime AI applications over the next two years.

Renewal of MoU between SMI and University of Turku, Finland to Promote Maritime R&D Activities

SMI and the University of Turku (UTU) in Finland first signed an MoU in 2016 to jointly promote and collaborate on maritime R&D activities, and will renew the MoU for another 5 years. SMI and UTU seek to further pursue innovation and deepen R&D collaborations in SMI’s renewed R&D focus areas in Next Generation Port; Smart Shipping; and Green Technologies.

MPA and China Waterborne Transport Research Institute also renewed the MoU signed in 2019 to collaborate on research. Under the MoU, WTI and MPA will continue cooperation in the field of maritime and port affairs, research and development.