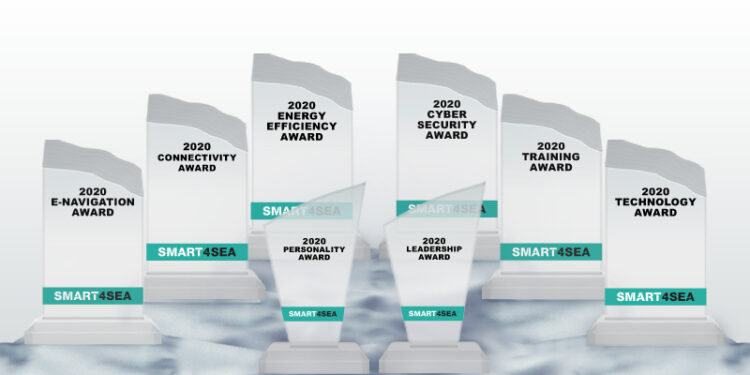 SAFETY4SEA is pleased to announce the distinguished shortlisted nominees for the 2020 SMART4SEA Awards, following an online nomination process, initiated a few months ahead, where industry stakeholders proposed nominations. The aim of the awards is to recognize those organizations that demonstrated outstanding performance within the scope of fostering Smart & Sustainable Shipping.

The online voting process has started at https://events.safety4sea.com/2020-smart4sea-awards/ where participants can cast their votes online up to 3rd of January, 2020. The winners will be the ones attracted the most online votes and the results will be announced during a prestigious award ceremony, on January the 28th, the evening ahead of the SMART4SEA Athens Forum.  The 2020 SMART4SEA Athens Forum will take place on Wednesday, 29th of January at Stavros Niarchos Foundation Cultural Center (SNFCC), Greece.

Full details of the event are available at https://events.safety4sea.com/2020-smart4sea-athens-forum/

Nominations shortlisted for the 2020 SMART4SEA Awards include the following organisations per category:

To be awarded to any organization that provided a significant achievement, breakthrough or contribution in any aspect of e-navigation in shipping.

#1 Furuno has been nominated for developing a navigation system using augmented reality, the AR Navigation System, to be installed onboard 21 MOL VLCCs. The system displays information on other vessels sailing on a vessel’s planned route and surrounding sea areas and other ocean conditions, such as shallow waters, on tablets and screens.

#2 Marine Fields has been nominated for its data sharing platform Perseus, which enables industry stakeholders to share time stamps and common situational awareness among each other associated to port call operations. It aims at providing capabilities for sharing time stamps, in the standardized format S-211.

#3 Massterly has been nominated for offering services to facilitate the path towards autonomous ships; from vessel design, construction and approval from relevant authorities, to logistics services, vessel operations, insurance and financing. It is a Kongsberg – Wilhelmsen joint venture with the aim to make autonomy a reality.

#4 One Sea has been nominated for creating a new industrial standard for marine traffic to lead the way towards an active commercial autonomous ships ecosystem by 2025. The aim is to promote collaboration amongst pioneering marine and technology suppliers, shipyards, ship owners and research organizations.

#5 Total Marine Solutions has been nominated for its Ocean Guardian digital tool designed to create one of the most comprehensive digital databases and environmental operations planning tools in the market, simplifying voyage and operations planning while offering fleet wide visibility in real time.

To be awarded to any organization that provided a significant achievement, breakthrough or contribution with respect to ship connectivity.

#1 Airbus has been nominated for its OceanFinder service which delivers fast satellite-based detection and identification reports for assets at sea. Among many applications, it supports monitoring fleets of ships, locating of hijacked boats, illegal activities detection and maritime mission preparation.

#2 Marlink has been nominated for on-going innovation in the area of connectivity which is referred to as its ‘Digital Enablement Strategy’. By understanding the needs of its customer across all maritime verticals, Marlink has designed integrated, yet simple to understand solutions portfolios covering all aspects of maritime digital transformation.

#3 MPA Singapore has been nominated for the launch of its GeoSpace-Sea system which aims to provide comprehensive and consolidated geospatial data for port, marine and coastal planning, and environmental management in a timely and efficient manner.

#4 OTESAT/MARITEL has been nominated for its‘[email protected]’ networking tool built for satellite bandwidth management and data transmission optimization in the complex marine IP environment. [email protected] works at the background of any satellite link, allowing integration of further services and applications.

#5 Port MiFi project has been nominated for its aim to help seafarers face connectivity challenges. The one-year trial scheme – funded by the ITF Seafarers’ Trust and managed by the Merchant Navy Welfare Board (MNWB) will using mi-fi technology (wireless routers that act as a mobile wi-fi hotspot).

To be awarded to any organization that provided a significant achievement, breakthrough or contribution in any aspect of energy efficiency in shipping.

#1 ABS has been nominated for its Low Carbon Shipping Outlook, a tool to help shipowners understand the task ahead and effectively assess their options for a transition to low carbon operations which defines ship technologies, operational efficiencies and alternative fuels and energy sources needed to reach 2030 and 2050 targets.

#4 LAROS by Prisma Electronics has been nominated for offering an innovative system that enables remote monitoring and analysis of vessels operational parameters. The LAROS system is a versatile tool that provides diagnosis, prognosis, and early warning by collecting and transmitting data to the operations’ center in real time.

#5 METIS has been nominated for optimizing Hull & Propeller performance through the application of Artificial Intelligence technologies and Machine Learning models. The methodology involves the development of a virtual digital model which can provide valuable insights such as to predict the power loss due to the Hull & Propeller fouling.

To be awarded to any organization that provided a significant achievement, breakthrough or contribution in any aspect of Cyber Security in shipping.

#1 BIMCO has been nominated for launching a new cyber security clause that requires the parties to implement cyber security procedures and systems, to help reduce the risk of an incident and limit the consequences in the possibility of a security breach occurring.

#2 ClassNK has been nominated for launching a Cyber Security Management System for Ships which provides guidance on ensuring, implementing, maintaining, and continuously improving the cyber security management system of companies and ships with the goal of safe navigation

#3 IACS has been nominated for launching 12 cyber security recommendations with the aim of enabling the delivery of cyber resilient ships whose resilience can be maintained throughout their working lives. In addition, IACS has formed a Joint Working Group (JWG) on Cyber Systems for identifying a practical risk approach.

#4 Port of Amsterdam has been nominated for its cyber security program on the occasion of the online publicity campaign ‘First check, then click’ being conducted by the Government of the Netherlands to call on people to better protect themselves against internet crime.

#5 Wärtsilä has been nominated for actions to promote cyber security awareness as a founding member of the Operational Technology Cyber Security Alliance (OTCSA), which aims to bridge dangerous gaps in security for operational technology and industrial control systems.

To be awarded to any organization that provided a significant achievement, breakthrough or contribution in any aspect of Training with respect to smart shipping.

#1 DNVGL has been nominated for its Maritime Academy which provides one of the broadest portfolios of training courses for the maritime industry. Operating in more than 100 countries, DNV GL course portfolio is based around three core themes: Developing People, Operating Ships and Building Ships.

#2 US Navy has been nominated for testing Augmented Reality, offering a unique training package, entitled  TRACER, with the aim to train sailors from divergent career fields in US Navy security force fundamentals, code of conduct, anti-terrorism and warfare training.

#3 Videotel has been nominated for its new virtual reality (VR) training which aims to help ship operators avoid possible claims running into millions of pounds, because of cargo damage caused by insufficient tank cleaning on board chemical tankers.

#4 VSTEP has been nominated for NAUTIS, the world’s first portable tug simulation training solution, developed in cooperation with 360-Control. It is an advanced software platform that facilitates the integration of maritime simulation and virtual training.

To be awarded to any organization that provided a milestone technological achievement or breakthrough or significant contribution in any aspect of smart maritime activity.

#1 ABS has been nominated for the launch of its the Guide for Smart Functions for Marine Vessels and Offshore Units (Smart Guide), which introduces a unique class approach leading to the marine and offshore industries’ first set of notations to help owners and operators qualify and utilize smart functions

#2 C Teleport has been nominated for its C Teleport app which facilitates crew management. The app can eliminate the need for a travel agent and give full control of all marine travel plans. C Teleport connects with crewing software and manages maritime travel much faster with complete transparency and ease of use.

#3 Kongsberg has been nominated for its Vessel Inisght, a new subscription-based service addressing the key challenges for digital adoption in the maritime industry. Vessel Insight’s secure and cost-efficient data infrastructure enables ship owners, managers and operators to unlock the value of their data.

#4 METIS has been nominated for specializing in the development of innovative solutions based on Artificial Intelligence, that empower shipping companies towards digital transformation. One of the most prominent examples is the optimization of Hull & Propeller performance through the application of AI and Machine Learning models

There are no nominees shortlisted for this Award. After consideration and review of a list of “Editor’s Pick” nominees, the SAFETY4SEA Team will announce the winners on the night of the awards presentation. These are special category awards for any individual person that provided industry leadership and contributed towards smarter shipping throughout his/her career.