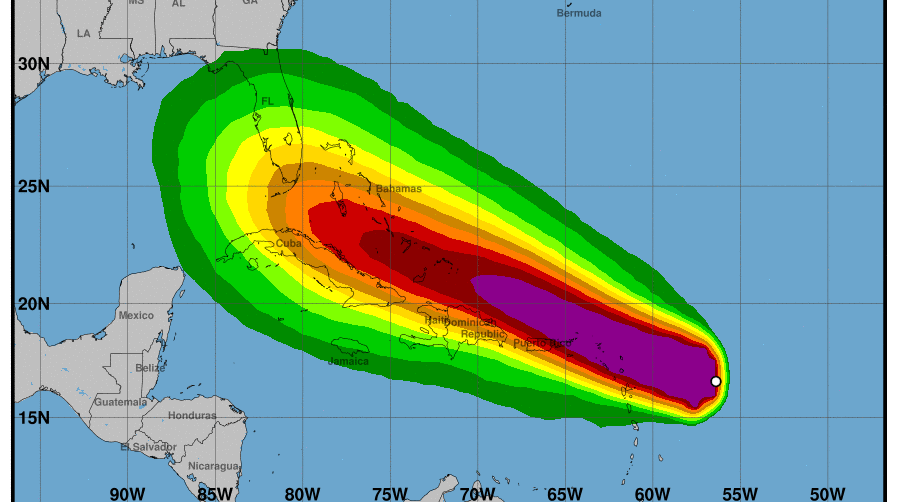 Ships may need to adjust their route as Irma passes

Hurricane Irma is expected to hit the US Virgin Islands Tuesday and mainland Thursday. The storm is currently a Category 5 hurricane and is expected to remain a Category 4 or 5 during the next days. Cruises and shipping interested in transiting those areas, are encouraged to reroute.

Reports from NOAA and U.S. Air Force Hurricane Hunter aircraft have found that the storm’s maximum wind speeds are 175 mph, Tuesday morning, and is expected to reach southern Florida and the Gulf of Mexico this weekend. The forecasts indicate Irma as an extremely dangerous category 5 hurricane on the Saffir-Simpson Hurricane Wind Scale and it now ranks among the strongest hurricanes ever recorded in the Atlantic Ocean.

As noted, some fluctuations in intensity are likely during the next day or two, but Irma is forecast to remain a powerful category 4 or 5 hurricane during the next couple of days.

Ahead of the Irma, several cruise lines, such as Carnival, Royal Caribbean and MSC, are altering their routes towards Western Caribbean, to avoid the heavy storm, but operations are unaffected in other areas.

In addition, effective 8 p.m. Tuesday, the Coast Guard has set port condition ZULU for Puerto Rico and the U.S. Virgins Islands due to the possibility of sustained gale force winds greater than 39 mph from the Hurricane.

The US Coast Guard strongly urges the maritime community to remain vigilant and take the necessary precautions: