Shipping’s climate impact has increased 10% in just six years, according to a study released by the IMO. If no measures are taken, the study estimates that carbon pollution from ships could increase by up to 50% by 2050.

Namely shipping’s methane emissions grew by 150% in the last six years due to the increased deployment of LNG ships, the study finds.

It also reveals the weakness of the IMO’s 40% carbon intensity reduction target, as three-quarters of the targeted improvements had already been achieved before the goal was even adopted in 2018.

Commenting on these findings, Green group Transport & Environment said that the EU must activate its plans to include maritime emissions in its carbon market and introduce CO2 standards for ships while in operation.

Shipping’s carbon pollution has grown at an alarming rate and could rise by half by 2050 if real action is not taken. Now is the time for the EU to push ahead with its plan for emissions trading for shipping and also quickly adopt the CO2 standards the European Parliament has called for. Standards will drive the uptake of the hydrogen and ammonia that European shipping needs to decarbonise 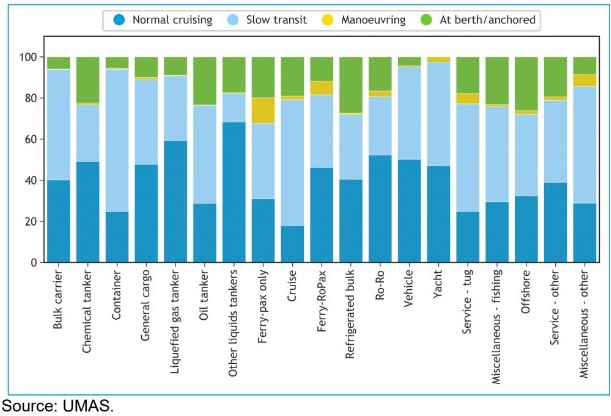 What is more, GHG emissions of global shipping are expected to continue to increase, under current policy, according to the 4th IMO GHG Study. Specifically, advances in this new study’s methods have estimated that 30% of total shipping emissions fall directly within national government responsibility, twice the magnitude previously estimated.

These findings set a significant challenge for governments domestically, and collectively at the IMO, if the sector is to contribute proportionally to achieving the Paris Agreement temperature goals. The study also shows strong, clear policy action must be taken for the sector to urgently transition away from the use of fossil fuels.

Until now only a few countries had investigated their shipping emissions at this level of detail, says UMAS, and the IMO had had to make simplified estimates that have been shown to underestimate the level of emissions that count as ‘domestic’ shipping and fall within the responsibilities of individual governments to manage.

In addition, the study produced many further insights into the recent trends in shipping emissions and the drivers of these trends.

Elena Hauerhof, UMAS, leader of the inventory work, highlighted that:

This study represents a significant step forward in estimating emissions inventories, and for the first time uses a fully IPCC -aligned approach to estimate international shipping emissions. The study has also significantly advanced the accuracy of AIS based estimations for any ship, and evidences this by undertaking a detailed validation against fuel consumption and other key parameters reported in EU MRV for over 9000 ships 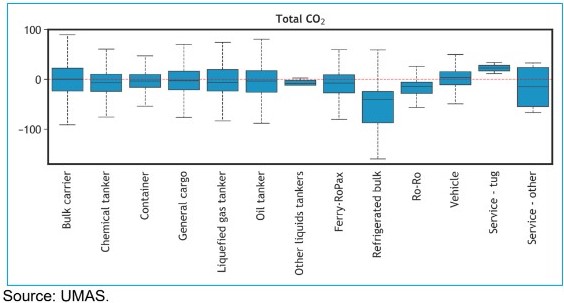 As for LNG, the study supports that it is only a significant fuel for liquefied gas tanker. However, HFO still remains the dominant marine fuel in 2018, with some alternative fuels, such methanol now registering in this study because a very small number of ships have started to use it.

Finally, the study provides some answers on whether the industry can trust AIS data to estimate emissions. As it says, the results are further evidence that using AIS data in models is a powerful and accurate means to estimate emissions from international shipping, particularly when estimating averages, trends and totals for fleets of ships.

In fact, in these applications, the study’s quality and uncertainty analysis proves that the sector can trust AIS-derived estimates. On the other hand,  IMO DCS data is currently incomplete, and has as yet unproven/qualified accuracy.

The GHG emissions are estimated using satellite reception of data reporting a ship’s identity, position, speed. These are combined with engineering representations of a ship, to estimate the power required for it to travel at the speed it is observed at, and therefore the fuel consumption and then the emissions.

This method requires assumptions to be made especially about the detailed technical specification of the ship, the weather, the hull and machinery condition. For any ship, the estimate can under/over estimate by a significant margin. However, as long as sources of uncertainty are symmetrical, then for groups of ships, these uncertainties average out to produce accurate and representative totals and average values.

The estimated data was extensively quality assured/controlled, including through comparison against over 9000 ships reporting to the EU MRV scheme. The aggregate uncertainty was estimated to be less than 5% for this comparison.

Additionally, the IMO has instigated a Data Collection System, requiring reporting of ship’s annual fuel consumption and distance travelled, starting from 2019. This is measured data, not estimated and so in theory should be higher accuracy .However, this requires that the data is complete and that the data is measured and reported correctly. The IMO DCS, after the deadline for 2019 submissions, had collected less than 90% of the eligible ship’s reported data. 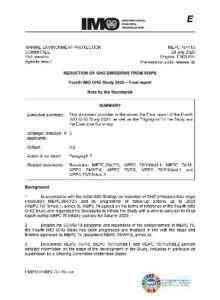