In its annual Safety and Shipping Review, Allianz revealed that 2017 saw the second lowest total of shipping losses over the past decade. In 2017, losses figures decreased slightly by 4%, from 98 to 94, but losses in the last ten years have declined by more than a third (38%), driven by improved ship design, technology and advances in risk management and safety, as well as recent lower shipping activity.

Human error continues to be a major driver of incidents and captains and crews are under increasing commercial pressure as supply chains are streamlined. Tight schedules can have a detrimental effect on safety culture and decision-making leading to the “normalization of risk”.

Better use of data and analytics can help to address this. The shipping industry has learned from losses in the past but predictive analysis is important for the future. New insights from crew behavior and near-misses can help identify human error trends. Sensor technology can also enhance risk management. For example, hull stress monitoring sensors could be linked to ship navigation in bad weather, feeding real-time information on structural integrity. However, over-reliance on technology on board must be avoided. Continual training is imperative to ensure the right balance is achieved between technology and human intervention. 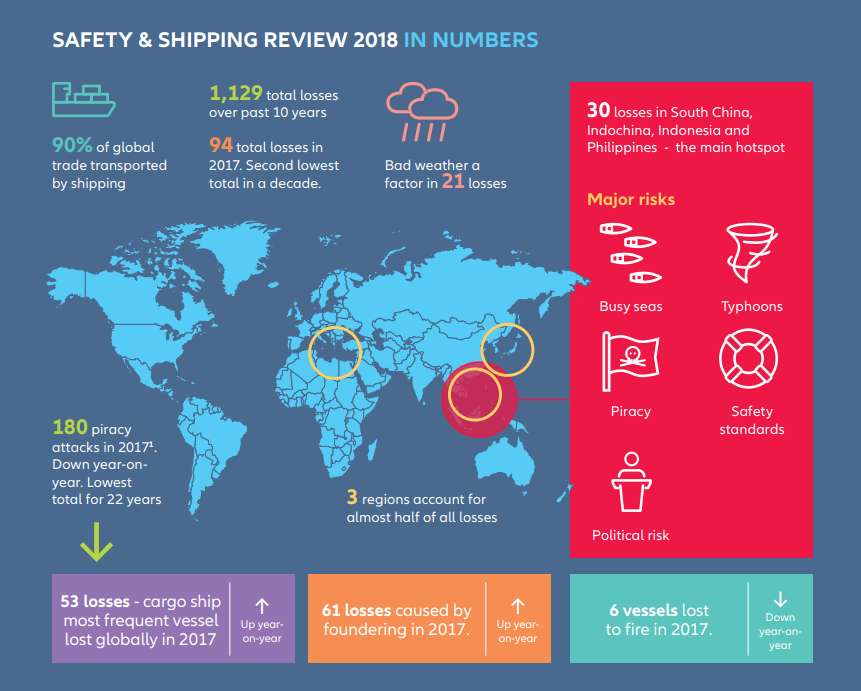 Exploitation of the seas increases

Shippers get serious on cyber

Unmanned aircraft systems are increasingly used by class societies and marine surveyors to assess vessel damage and more uses are likely in future, which could have the potential to make a significant contribution to safety and risk management. These include assessing environmental pollution, monitoring cargo loading and pirate activity along coastlines and carrying out cargo tank inspections. Drones could enable faster, more informed decision-making on board, reducing the impact of any incident.

Heightened political tensions around major shipping routes, such as off the coast of Yemen in the Middle East and the South China Sea in Asia, pose a risk of disruption.