The International Chamber of Shipping (ICS) is leading calls for governments to put seafarers and frontline maritime shore workers at the head of the vaccine queue and to designate seafarers as key workers, to prevent a repeat of the 2020 ‘crew change crisis’.

The renewed call comes as mutations of the COVID-19 virus continues to put struggles to crew changes. Since the beginning of the pandemic, restrictions have forced hundreds of thousands of seafarers to overrun their contracts, rising concerns over ship safety, crew fatigue and access to healthcare.

Between March and August 2020, ICS estimates that only 25% of normal crew changes were able to take place, while current estimates show up to 400,000 seafarers are stranded at sea by the crew change crisis, with up to 400,000 unable to join ships.

With limited support from national governments, there is real concern that, under new restrictions, this number will rapidly increase rather than reduce,

More recently, the spread of new variants of COVID-19 in Brazil, South Africa and the UK has contributed to stricter crew change restrictions globally. The Philippines, for example, has expanded its temporary crew change ban to 35 countries, barring foreign seafarers from disembarking at Philippine ports. The UK is banning travellers from South America, and the US has also toughened its entry requirements.

This is part of a wider global retrenchment around ease of travel, which the shipping industry fears could result in hundreds of thousands of seafarers becoming the collateral damage of government inaction.

In view of the above, ICS demands that governments "take their duties to seafarers seriously and avoid a repeat of the mistakes of 2020". The ILO’s high-level committee of legal experts found last year that governments had breached seafarers’ rights and failed to comply with several provisions of the MLC during the COVID-19 pandemic.

The average ship has a mix of at least three nationalities onboard, and sometimes as many as 30. This fact makes the possibility of vaccinating by nationality, which is the current model of vaccine distribution, challenging. Priority access to vaccines for all seafarers, and clear ‘vaccine passport’ protocols in line with World Health Organization (WHO) recommendations, is seen as vital to the maintenance of global trade,

Prior to the ILO’s ruling in December 2020, the UN General Assembly adopted a resolution that calls for all countries around the world to designate seafarers as key workers.

While more than 40 countries have so far recognised seafarers as key workers, the majority of seafaring nations have not, creating growing demand from within industry for new solutions to the issue of vaccine distribution, before the humanitarian crisis facing seafarers gets any worse.

If we want to maintain global trade, seafarers must not be put to the back of the vaccine queue. Governments will not be able to inject their citizens without the shipping industry or, most importantly, our seafarers, 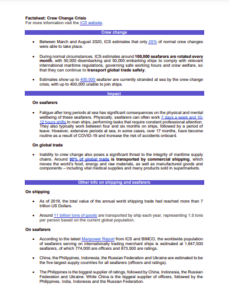