The number of times a ship has been detained during a 24 month period is because of the NIR (New Inspection Regime) now a 36-month period and is included in the list.

Details of detentions are entered in the information system of the Paris MoU after the ship has been released.

Therefore, the details on a detention of a ship detained, for example, in September but released in October are only available in October.

In general, a ship is not released from detention before all necessary repairs have been made. However, sometimes it is not possible to repair all defects at the place of detention.

Find out the ships released from detention in February herebelow: 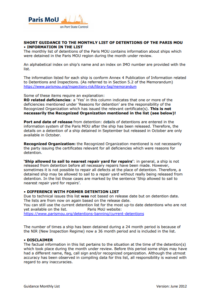