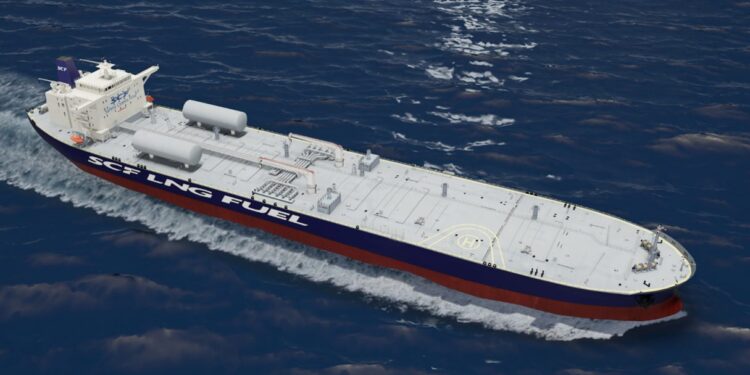 SCF Group (Sovcomflot) has signed an agreement with Shell Western LNG B.V. (Shell) for the supply of liquefied natural gas (LNG), to fuel the first Aframax crude oil tankers in the world to be powered by LNG. The agreement was announced by Sergey Frank, President & CEO of Sovcomflot, and Maarten Wetselaar, Integrated Gas and New Energies Director at Shell.

The agreement calls for Shell to provide the LNG fuel for the new generation of SCF Group’s 114,000 deadweight ice-classed Aframax tankers, that are scheduled to come into operation beginning in Q3 2018. They will be the first LNG-fuelled Aframax tankers and will operate primarily between the Baltic and Northern Europe transporting crude oil and petroleum products. Shell will fuel the vessels from a specialized LNG bunker vessel at the Gas Access to Europe (GATE) terminal in Rotterdam, the Netherlands and other supply points in the Baltic. Each LNG-fuelled tanker will have an ice class 1A hull enabling year-round export operations from the Russian Baltic.

“SCF Group and Shell have an extensive and successful track record of collaboration and technical innovation, and at the heart of our joint aspirations is the shared desire to play a major role in delivering a cleaner and safer maritime environment. This is why SCF Group and Shell decided to pilot this breakthrough initiative to switch the principal fuel of Aframax tankers, the workhorse of the global tanker industry, to LNG,” said Sergey Frank.

“This is an important next step for gas as part of the energy mix. The decision to work with SCF Group to power the world’s first LNG-fuelled Aframax crude oil tankers is evidence of Shell’s commitment to LNG as a transport fuel. LNG will increasingly play a larger role in helping the shipping industry meet new emissions regulations,” said Maarten Wetselaar.

The signing of this agreement marks the fulfillment of an MOU signed between Shell and SCF in September 2015 to develop Marine LNG fuelling for large-capacity tankers.

According to the company, the use of LNG fuel improves vessels’ environmental performance and meets the growing desire of operators to see their shipping requirements provided with minimal adverse impact on the environment.

Engines running on LNG release over 90 per cent less Sulphur Oxide (SOx), over 80 per cent less Nitrogen Oxide (NOx) and over 15 per cent less Carbon Dioxide (CO2) into the atmosphere than engines burning standard marine fuels. In addition, the selection of the low pressure X-DF dual fuel engine for these tankers will minimise Particulate Matter emissions. Further, the engines will be fitted with Selective Catalytic Reduction (SCR) technology to comply with Tier III regulations governing NOx emissions when in fuel mode.

The company continues to invest in the renewal of its fleet, replacing older vessels with modern and energy efficient ships that make extensive use of innovative technologies. The average vessel age within SCF Group’s fleet is currently around 8.5 years, making its ships already relatively new by global shipping industry standards.