Three European oil and gas majors, UK’s Shell, BP, and Italian Eni, have outperformed their peers in new project approvals and lifting costs, according to latest research by Rystad Energy. For projects that have started up since 2014, majors have collectively achieved greenfield costs of $13.50 per barrel of oil equivalent.

These development costs were in addition to their collective $8.80 per barrel of oil equivalent lifting costs from 2017. The below analysis allocates 100% of a project’s cost to the operator who is executing the project (i.e. does not split to equity shares). 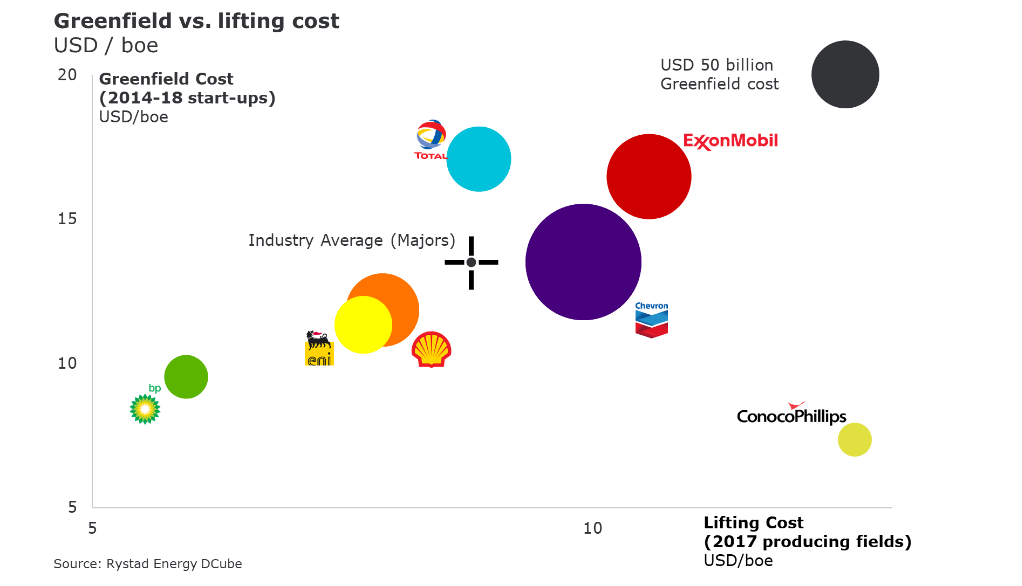 It is remarkable that BP, Eni and Shell introduced over $109 billion of new greenfield projects below the industry average greenfield cost and still were able to still achieve industry-leading lifting costs in 2017. BP’s $6.0 billion investment in the Khazzan Phase 1 and Makarem projects in Oman highlighted their execution excellence by achieving greenfield costs below $5 per barrel of oil equivalent.

Conversely, despite starting-up nearly $75 billion worth of project investments, ExxonMobil’s greenfield performance on the PNG LNG Phase 1 and lifting cost performance on Kearl Phase 2 have deteriorated their overall marks to trail industry averages, while its greenfield investments have been ‘virtually non-existent’ since 2014, Mr.Fitzsimmons noted, adding however, that the outlook is not all glum for the world’s largest IOC:

We’ve also noticed that ExxonMobil has improved its greenfield cost performance since 2014 as it gears up to take on the challenge put forth by the company CEO to double earnings by 2025. 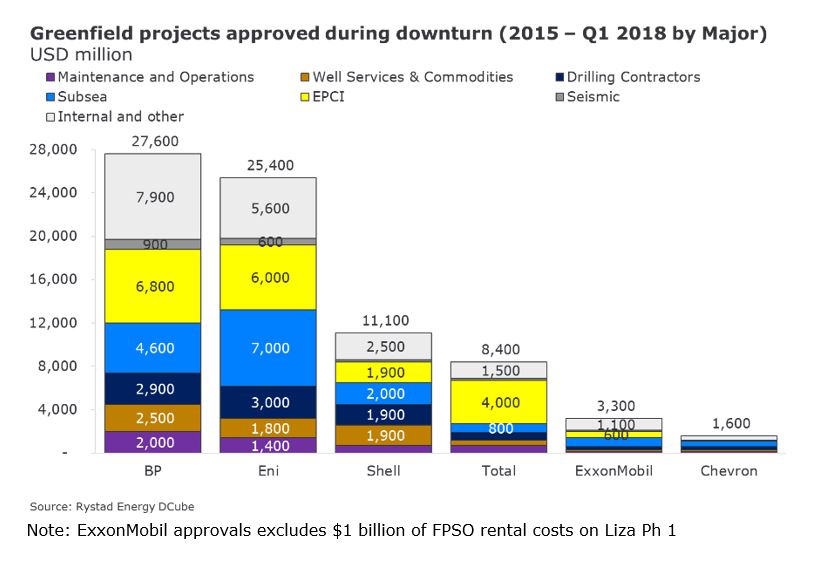 BP’s best-in-class lifting costs from 2017 of below $6 per producing barrel should give investors confidence when all these new projects come on-line. Eni’s recent $25.4 billion greenfield approvals have exclusively been to bolster its offshore portfolio. The company’s investments in several mega offshore projects, such as Coral FLNG, Sankofa East FPSO and three phases of Zohr, are good news in relation to the offshore industry’s attempt to rebound.

Collectively, majors are on pace to approve over $37 billion in projects during the calendar year. Over 30% ($12 billion) of those were approved during the second quarter, Rystad adds.