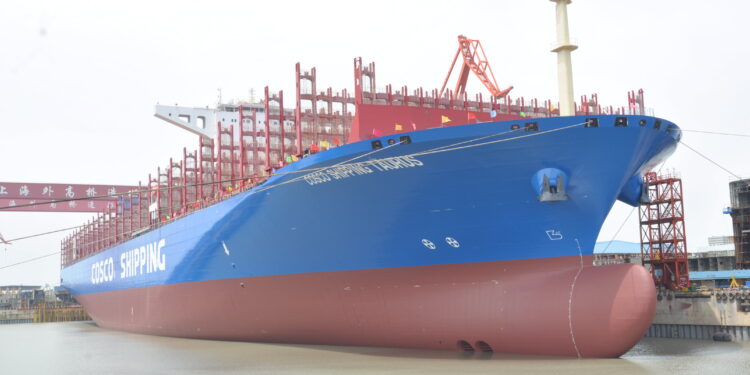 Shell Marine has been awarded COSCO’s largest marine lubricants order in 2017.  This order will include the full range of marine lubricants and technical services for seven out of COSCO SHIPPING’S 10 new generation Ultra Large Container Carriers (ULCCs).

The ULCC’s will have capacities of approximately 20,000 TEUs each, they were ordered in 2015 and they are expected to be in service from 2018-2019.  Shell Marine has supplied marine lubricants and services to over 140 COSCO SHIPPING vessels since 2004.

Jan Toschka, Shell Marine Executive Director, mentioned: “The quality of marine lubricants is critical for engine reliability; the application of the right technical services enable ship owners and operators to optimise their vessels’ total cost of ownership.  In today’s highly competitive and challenging maritime sector, operational reliability and excellent account management have become table stakes and we in Shell Marine are stepping up to the plate. Securing this major contract for ships that play a leading role in delivering Chinese exports on the just-in-time basis required at this scale demonstrates owner preferences for proven lubricant performance, supported by a global logistics network and comprehensive technical services.”

The deal between the two companies includes onboard testing, assisting not only in COSCO SHIPPING’s blend-on-board program, its oil drain monitoring, but also providing customised analysis and comments in Chinese language as part of COSCO’s Shell Rapid Lubricants Analysis report.

Shell has also positioned one of its “Technical Maritime Hubs” in Shanghai with technical experts ready to provide services to COSCO SHIPPING.

COSCO SHIPPING is currently in the process of taking over Orient Overseas Container Line (OOCL), which operates the largest container ships afloat.