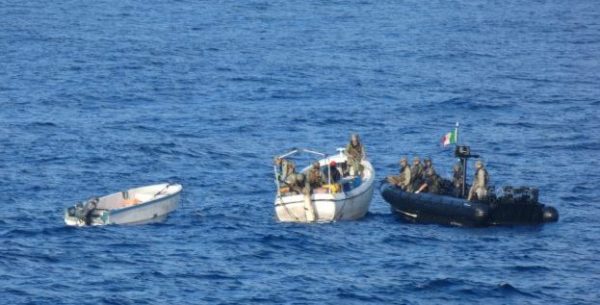 They pirates will now face legal prosecution before the court and if convicted, they could face up to 30 years’ imprisonment in a Seychelles detention facility.

The six Somalis weer onboard a motor whaler, supposedly acting as mother ship.  They were detained in a skiff after attacks on a 52,000 tonne container ship, 'MV Ever Dynamic' and a fishing vessel 'Galerna III'.

These events reportedly occurred over a 24 hour period on 17th and 18th November in the Southern Somali Basin, in an area known for piracy incidents.

During these incidents, a number of rocket propelled grenades were, allegedly, fired against the container ship. However, all crew avoided any damage or injuries and is safe along with the vessels.

The suspected pirates were apprehended by the Italian Marines from 'ITS Virginio Fasan' after their vessels were located using Fasan’s SH-90 helicopter, following searches conducted by the Spanish Maritime Patrol Aircraft.

This search was conducted in cooperation with military partners and from information provided by the masters of the vessels concerned.

Major General Charlie Stickland, Operation Commander of EU NAVFOR stated:“I am delighted that the evidence gathered by our flagship, ITS Fasan was sufficient for the Seychellois authorities to bring this case to trial. Once again, I would like to personally congratulate the efforts of the Seychelles authorities and the men and women working for on Operation Atalanta to help keep the seas safe 24 hours a day”.