Seventh incident against ship in Singapore Strait for 2020

In its weekly report for 11-18 February, ReCAAP ISC informed of two incidents of armed robbery against ships in Asia: one at an Indian anchorage and another one off Indonesia, in the Singapore Strait. The latter is the seventh incident reported in the region this year. There was also an incident outside Asia, on the Arabian Sea.

The CAT 3 incident occurred at Kakinada anchorage, India; and the CAT 4 incident occurred while underway off Karimun Besar Island, Indonesia in the eastbound lane of the Traffic Separation Scheme (TSS) in the Singapore Strait.

The latter is the 7th incident in the region in 2020. In January 2020 alone, four incidents were reported in the eastbound lane of the Traffic Separation Scheme (TSS) in the Singapore Strait.

During the last 5 months, 24 incidents were reported in the eastbound lane of TSS.

While anchored at Kakinada Anchorage, India, four perpetrators armed with knives boarded the ship from a blue and yellow craft via the starboard quarter through the ship's tyre fender.

The master raised the alarm and the perpetrators escaped with 20m of mooring rope.

The master reported the incident to Kakinada Port Control, who informed the coastal security police. The crew was not injured.

The second incident involved the Malaysian-flagged tug boat Sung Fatt 27, approximately 9.4 nm east of Karimun Besar Island, Indonesia in the eastbound lane of the TSS in the Singapore Strait.

Eight perpetrators boarded the barge, stole about 20kg of steel construction material and escaped. The crew was not injured. 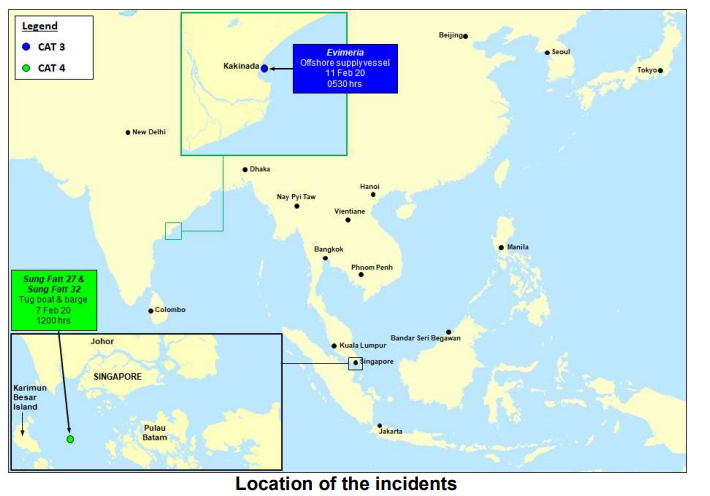 In the morning of 10 February, the Singaporean-flagged Liquefied gas carrier BW Paris was underway on Arabian Sea, when three perpetrators in a skiff started pursuing the vessel.

The perpetrators were not armed and there was no boarding or fishing equipment sighted on board the skiff. The master activated the SSAS and adopted counter-piracy procedures.