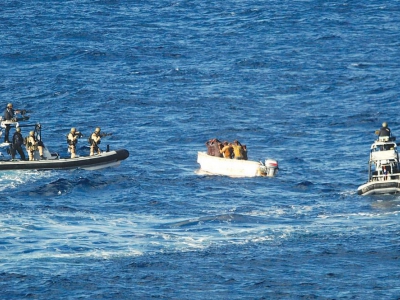 The United Nations Security Council has reiterated its calls on the international community to fight piracy and armed robbery at sea, which continue to pose a threat to the delivery of humanitarian aid to the country.

In its resolution, the Council urged Member States to work in conjunction with relevant international organizations to adopt legislation to facilitate prosecution of suspected pirates, as well as to cooperate on the issue of hostage-taking.

Pirate networks "continue to rely on kidnapping and hostage-taking," the 15-member Council said, noting that the profits "help generate funding to purchase weapons, gain recruits, and continue their operations activities, thereby jeopardizing the safety and security of civilians and restricting the flow of free commerce."

Pirates off the coast of Somalia and the Horn of Africa have made between $339 million and $413 million in ransom profits in the past seven years, fuelling a wide range of criminal activities on a global scale, according to 'Pirate Trails' - a report released earlier this month by the UN Office on Drugs and Crime (UNODC), the World Bank and INTERPOL.

Meanwhile, piracy is estimated to cost the global economy about $18 billion a year in increased trade costs, as well as significant decline in tourist arrivals and fishing yields since 2006.

The Council, in particular, commended Kenya, Mauritius, Seychelles and Tanzania for their efforts to prosecute suspected pirates in national courts.

It also reiterated its calls on Member States to fight piracy by deploying naval arms, military aircraft and by supporting counter-piracy forces, as well as by seizing and disposing boats, arms and other equipment suspected in piracy.

They also decided that the arms embargo, originally imposed in 1992, "does not apply to supplies of weapons and military equipment or the provisions of assistance destined for the sole use of Member States, international, regional and sub-regional organizations" working to stop the scourge.

Turning to Somali authorities, the Council reiterated its calls to interdict piracy, and to investigate and bring to justice "those who are using Somali territory to plan, facilitate, or undertake criminal acts of piracy and armed robbery at sea."