Deep sea mining seems to be in the spotlight; Yet, there is no detailed information on its potential impacts. Thus, companies and their investors are supported by governors and programs that are in favour of developing a 'responsible' sea bed mining regulations. The report 'Why the Rush' supports that deep sea mining will be another weight on the already polluted oceans.

The report Why the Rush? launched by Mining Watch Canada, Deep Sea Mining Campaign and London Mining Network claims regulatory processes have been fast tracked before Pacific Island citizens, whose lives and livelihoods are intrinsically tied to the ocean, have had a chance to meaningfully discuss the industry.

According to the report, there are three distinct types of ore deposits found in the deep sea

The only certainty associated with DSM is that there would be direct and indirect impacts at every stage of the mining process.

Moreover, the report comments that the development of deep sea mining regulations at both Pacific regional and international levels is occurring in haste in the absence of meaningful public debate and with little consideration of the precautionary principle and the free, prior and informed consent of the Pacific island citizens who would be adversely affected by this unprecedented industry.

In the meantime, Greenpeace published a report highlighting that deep sea mining will have fatal impacts on the environment.

[The report addresses that deep sea mining undermines progress towards UN Sustainable Development Goal 12, which aims to ensure sustainable consumption and production patterns. In the meantime deep sea mining also goes against UN SDG 14, which refers to conserve and sustainably use the oceans, seas and marine resources for sustainable development.]

The report also notes that the environment is already stressed due to pollution, plastics, overfishing and climate change; Consequently, the sea bed mining companies that aspire to proceed to deep sea mining activities could be further environmental stressors.

NGOs, fisheries, tourism operators, scientists and governmental bodies around the world are calling for a moratorium on deep sea mining.

The seabed of the world’s vast oceans represents the common heritage of humankind. Yet, where is the public debate about this unprecedented industry?

The report concluded that a moratorium of at least 20 years must be imposed on the development of seabed mining regulations and the issuing of licences for exploration and exploitation in national and international waters.

Decisions that will affect the citizenry of the Pacific islands, and in fact the entire planet, must cease to be made by a small number of individuals with narrow interests behind closed doors.

A key question remains: Why the rush? 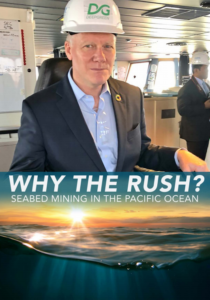