CE Delft issued a new study, in which it finds that scrubbers have a lower climate impact than low-sulphur fuels.

Namely, the study finds that the CO2-emissions associated using a scrubber vary between 1.5% and 3% for a number of representative ships.

In many cases, the emissions caused by producing low-sulphur fuels for these ships are higher, depending on the quality of the low-sulphur fuel, the refinery and the crude oil slate. This is the main conclusion from the new study ‘Comparison of CO2 emissions of MARPOL Annex VI compliance options in 2020’ issued by CE Delft.

Both options, according to the study, result in an increase of well-to-wake CO2 emissions. Specifically, a scrubber requires energy which is generated by engines running on fuel oil and thus generate CO2. In addition there are emissions associated with manufacturing scrubbers and emissions from the seawater.

Second, desulphurisation in a refinery requires hydrogen which is generally produced from methane, emitting CO2 in the process, as well as energy.

This report quantifies and compares the CO2 footprint of both options. The use of a scrubber results in an increase of CO2 emissions between 1.5% and 3% for a range of representative ships. Desulphurisation leads to an improvement of the fuel quality in terms of aromatics content and viscosity.

The increase of emissions associated with desulphurisation in a refinery are higher than 1% and in many cases multiple times higher, depending on the quality improvement of the fuel, the refinery layout and the crude used.

This study provides a comprehensive overview of the climate impacts of different options to reduce sulphur emissions. It shows that in many cases, the carbon footprint of using a scrubber is lower than low-sulphur fuels

The study used various reference ships and data about the scrubbers received from manufacturers, which they would have installed on the selected reference ships.

As for desulphurising fuel oil, its CO2 footprint depends on the crude oil used and the layout of the refinery.The study analysed the CO2 impact of two options: hydrotreatment of residual fuel and hydrocracking in combination with hydrotreatment. In these cases, the fuel quality improves.

In addition, many low-sulphur fuels have better qualities as far as viscosity and aromatics content are concerned, than required by the applicable standards.

The study has been commissioned by three EGCS suppliers, Alfa Laval, Yara Marine and Wärtsilä. 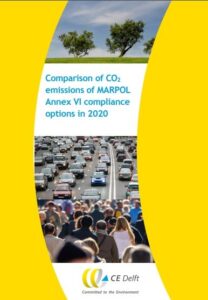