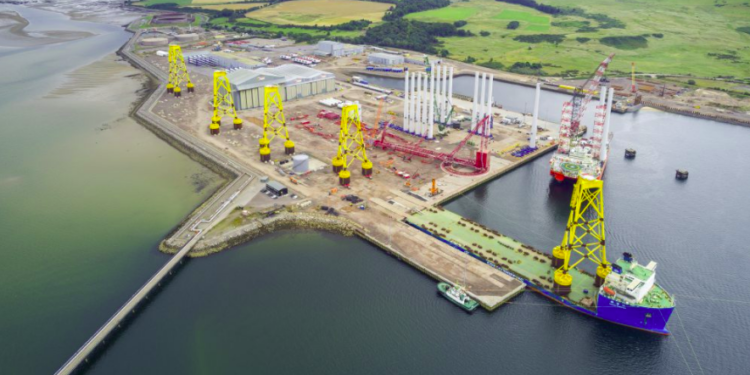 Global Energy Group, the owner of the Nigg Oil Terminal near Invergordon, Scotland, has entered into an agreement with Swiss-based integrated energy company, Proman to develop a renewable power to methanol plant utilizing local sources of captured CO2 at the terminal, setting the ground for a lower-carbon future in the country.

Under the name “Cromarty Clean Fuels Project“, the green methanol production facility seeks to strengthen resilience and competitiveness of the Cromarty Firth region by establishing an industrial low carbon cluster at the Port of Nigg which it hopes will increase local productivity and attract significant inward investment in essential supply chain infrastructure to help the Scottish and UK governments achieve their ambitious climate change targets.

Onshore and offshore wind is one of the world’s fastest-growing sources of energy, however, wind power must be dispatched as soon as it is produced, even if there is not enough demand for electricity. When this happens, operators have little choice but to disconnect the renewable source from the grid, leading to wasted energy and costs for governments and operators. This plant will have the capability of harnessing excess power to produce green methanol, which can then be used as an automotive or shipping fuel or as a chemical building block in thousands of everyday products,

The Cromarty Clean Fuels Project team is now assessing the commercial, technical and financial viability of a renewable power to methanol production and export facility with the ability to store onshore at Nigg and load methanol to be exported on bulk carrier vessels using the repurposed Nigg Jetty. The feasibility study is investigating how project feasibility changes with scale, to determine optimal scale for the project.

The UK has proven itself as a world leader in supporting offshore wind, tidal and other clean power generation technologies. Green methanol presents a significant opportunity to bridge the gap from fossil-based to renewable fuels as we move to a lower-carbon future and as such the production of and market for ‘green’ methanol from sustainable sources such as waste, biomass or renewable energy is growing and highly scalable,

Green methanol can be used as a fuel that drastically cuts GHG emissions by eliminating sulphur oxide and particulate matter, and significantly reducing nitrogen oxide and carbon dioxide emissions.