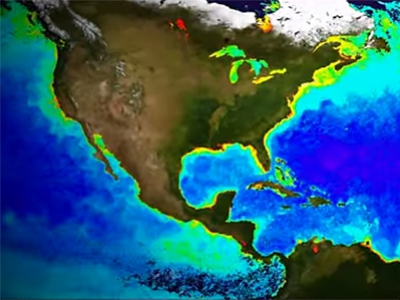 NOAA- and EPA-supported scientists have mapped the Gulf of Mexico dead zone, an area with low oxygen water, measuring 5,052 square miles this summer - approximately the size of Connecticut. The measurements were taken during the 30th annual hypoxia survey cruise from July 27 to August 2.

This area falls within the predicted range of 4,633 to 5,708 square miles forecast by a suite of NOAA-sponsored models and confirms the accuracy of the models and their utility for guiding management of nutrients in the Mississippi River watershed.

The size is smaller than the 5,840 square miles recorded last year but still greater than the Mississippi River/Gulf of Mexico Watershed Nutrient (Hypoxia) Task Force target of less than 1,900 square miles - meaning nutrients from the Mississippi River watershed are continuing to affect the nation's coastal resources and habitats in the Gulf. The task force consists of five federal agencies, 12 states and the tribes within the Mississippi/ Atchafalaya River Basin, and was established in 1997 to reduce and control hypoxia in the Gulf of Mexico.

The largest Gulf dead zone ever recorded occurred in 2002, encompassing 8,481 square miles. The smallest recorded dead zone measured 15 square miles in 1988. The average size of the dead zone over the past five years has been about 5,500 square miles.

"Dead zones," also called hypoxia areas, are caused by nutrient runoff from agricultural and other human activities in the watershed and are highly affected by river discharge. These nutrients stimulate an overgrowth of algae that sinks, decomposes, and consumes the oxygen needed to support life in the Gulf.

"The Mississippi River discharge levels and associated nutrient data, supplied in May by the USGS, pointed to an average size hypoxia area based on the inputs which fuel mid-summer's dead zone algal growth," said Nancy Rabalais, Ph.D., executive director of the Louisiana Universities Marine Consortium (LUMCON), who led the survey cruise. "If the heavy rains in the upper Midwest in June and the record high nitrate concentration in the Mississippi River at Baton Rouge on July 18 had coincided with a later survey, chances are that the area would have been larger. The high phytoplankton biomass and large area of fresher water would have eventually led to more bottom-water hypoxia."

The annual measurement mapping of the dead zone provides a critical scientific record of the trend of hypoxia in the Gulf, as well as the primary measure of progress used by the Hypoxia Task Force to determine whether efforts to reduce nutrient loading upstream in the Mississippi River Basin are yielding results.

The number of Dead Zones throughout the world has been increasing in the last several decades and currently totals over 550," wrote Rabalais in her detailed analysis of the 2014 Gulf hypoxic area. "The Dead Zone off the Louisiana coast is the second largest human-caused coastal hypoxic area in the global ocean and stretches from the mouth of the Mississippi River into Texas waters and less often, but increasingly more frequent, east of the Mississippi River."

"This longstanding annual mapping cruise has been a backbone of efforts to understand the causes, formulate solutions and track progress related to North America's largest hypoxic zone," said Ben Scaggs, director of the EPA Gulf of Mexico Program. "Our office is pleased to partner with NOAA on funding of the mapping cruise this year, helping to ensure the continuity of this important information that provides a foundation for regional interagency restoration efforts."

"NOAA provides the environmental intelligence, including forecasts, modeling and observations, about hypoxic conditions in the Gulf of Mexico to the interagency Hypoxia Task Force that in turn informs science-based management in a proactive manner to protect both resources and economies that are threatened by this problem," said Holly Bamford, Ph.D., assistant NOAA administrator for the National Ocean Service.

The hypoxic zone off the coast of Louisiana and Texas forms each summer threatening the ecosystem that supports valuable commercial and recreational Gulf fisheries. NOAA-funded research in the past decade shows hypoxia results in habit loss, displacement of fish (including shrimp and croaker) from their preferred areas, and a decline in reproductive ability in some species.

NOAA's National Ocean Service has been funding monitoring and research for the dead zone in the Gulf of Mexico since 1985 and currently oversees the NGOMEX program, the hypoxia research effort for the northern Gulf which is authorized by the Harmful Algal Bloom and Hypoxia Research and Control Act.