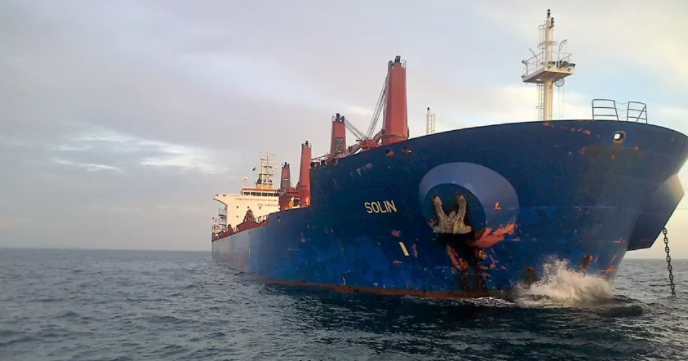 The South African Maritime Safety Authority (SAMSA) says a Croatian flagged vessel detained in South Africa two weeks ago after an oil spill during bunkering in Algoa Bay has been released.

According to SAMSA, the clean up of Tar balls that were washed up ashore following (the) oil spill that occurred during a vessel bunkering operation on the 17th of November 2021 in Algoa Bay is continuing this week with the Department of Forestry, Fisheries and Environment (DFFE).

To remind, SAMSA previously indicated that approximately 80 liters of fuel spilled into the ocean when the environmental pollution incident involving the MV Solin occured at about lunchtime that day, and as a result of which emergency containment and clean-up measures in terms of the National Oil Spill Contingency Measures were activated, involving a number of other organisations and institutions.

Since then, about a handful of seabirds were found oiled and had to be cleaned, along with suspected heavy fuel oil residue called ‘tar balls’ reportedly since spotted and picked up from the adjacent coastline north east of the port city of Gqeberha.

In Pretoria on Tuesday, the agency said:

So far four (4) kilometres of the approximately eight (8) kilometres stretch of coastline between Hougham Park and Sundays River has been cleaned. SAMSA and other stakeholders including the Department of Forestry Fisheries and Environment continues to monitor the remaining stretch beach for any additional oil/tar balls or oiled wildlife.

“The vessel was released from detention and was permitted to sail after an Admission of Contravention and the detention fee was paid by the vessel owner. The owner will remain accountable for all cleanup costs relevant to the oil spill.”

The MS Solin’s registered owner was indicated to be April Marine Inc and the vessels’ route track information by MarineTraffic on Tuesday showed the bulk carrier as having left Algoa Bay, on the indian Ocean, on 24 November 2021 for Saldanha Bay on South Africa’s west coast.