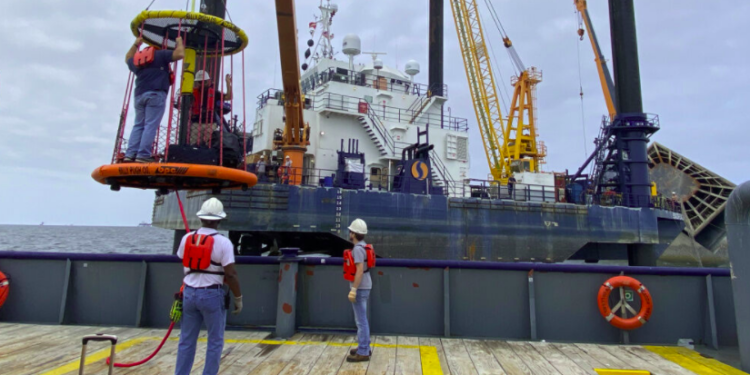 Almost three months after the fatal sinking of the lifting boat ‘Seacor Power’, salvage teams managed to raise the wreck’s bow section to the surface of the water and transported it by barge on Saturday to the Modern American Recycling Services, Inc. facility in Houma, the USCG announced.

With the bow section removed, salvage work continued at the site, where crews conducted more acoustic surveys of the stern and accommodation sections. The updated surveys will be used to complete the rigging configuration to prepare the stern section for removal. Once the stern section is raised, the crews will continue the preparation and removal of the accommodations section.

The Seacor Power departed Port Fourchon at about 1:30 p.m. April 13, bound for the oil and gas lease area Main Pass Block 138 in the Gulf of Mexico, but capsized amid heavy weather. Six people survived and six died as a result, while seven remain missing. The salvage operation proved challenging with salvage crews reporting about one month ago that the wreck had rotated and that the hull had separated from the superstructure.

These restrictions are in place to ensure the safety of salvage crews working at the wreckage site and the M.A.R.S., Inc. facility as well as boaters who could place themselves in danger by transiting through an active work site where debris and other underwater obstructions such as anchor wires, mooring ropes and navigational buoys may be present, the Coast Guard explained.

The incident is under investigation by the National Transportation Safety Board and the USCG. NTSB has also shared a preliminary report on Seacor Power fatal capsizing.