The sale of HSFO heavily declined while low-sulphur fuels skyrocketed in the final quarter of 2019, as the shipping industry transitioned into compliance with the IMO 2020 sulphur cap. This shift in bunker sales underlines the massive transition that the industry has been faced with at the turn of the decade, argues Peter Sand, Chief Shipping Analyst of BIMCO.

For example, Singapore, the world’s largest bunkering hub, saw a significant drop in the sale of high-sulphur fuel oil only in a matter of months.

Whereas bunker suppliers began their IMO 2020 transition in the third quarter of 2019, many shipowners waited until the last minute to transit, which allowed them to benefit from the declining HSFO prices in recent months, while also burning off the remaining HSFO left in the tanks, Mr. Sand notes.

The price of HSFO started to spike dramatically in 2019, driven largely by geopolitics and bunker suppliers preparing for IMO 2020.

The low-sulphur to high-sulphur spread widened towards record-breaking territory around the implementation deadline of IMO 2020, driven by rising low-sulphur fuel prices.

However, in the first two weeks of the year, the spread has started to narrow slightly, which could indicate that the global fleet has bunkered sufficiently for the first wave of the transition, as also evidenced by the bunker sales in Singapore.

A second wave will surely set into motion once the fleet has burned through the initial supply of low-sulphur fuels. Whether the spread will follow along the same lines and widen at that point remains uncertain, but it seems likely that the spread might narrow in the coming months, as the fog of IMO 2020 uncertainty clears, 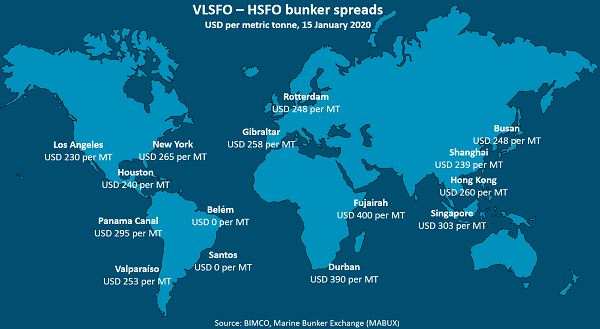 The shift of bunker sales in numbers

This is a massive change considering that it accounted for roughly 1% of total sales in the last couple of years. However, total 2019 bunker sales in Singapore were down 4% year-on-year, the lowest level since 2015.

The massive uptick in market share of low-sulphur fuels illustrate the first wave of IMO 2020, but BIMCO does not necessarily expect the low-sulphur to high-sulphur sales ratio to remain at these levels in the coming year.

Many of the scrubber-fitted ships are also the largest types of ships consuming relatively more fuel, which will surely facilitate stable demand for HSFO.

Almost from one day to another, IMO2020 has resulted in a massive increase in bunkering costs for shipowners and operators, costs which for many companies cannot be sustained for a prolonged period. Shipowners are trying to pass on the additional costs of bunkering to customers, but if the underlying supply and demand fundamentals are not balanced, their efforts may prove futile,

Now the industry is expecting the 1st March 2020, when the non-compliant fuel carriage ban is entering into force, prohibiting ships without a scrubber to even carry bunker fuels with sulphur content above 0.50%.