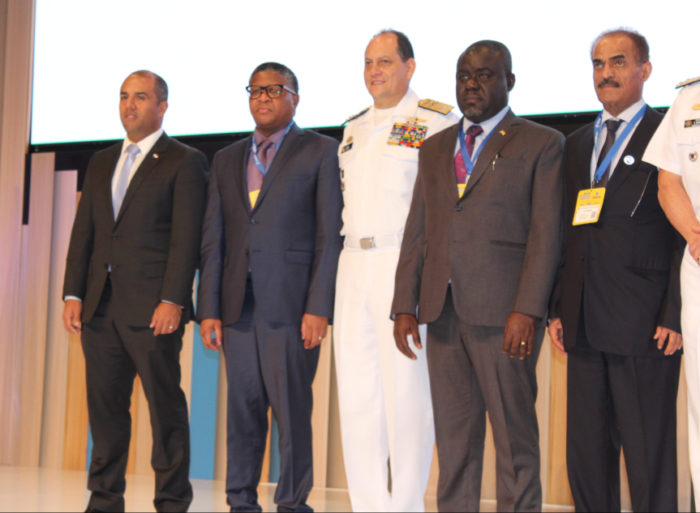 S. Africa, Colombia to strengthen cooperation on safety and security of seafarers

Discussions between South Africa and Colombia to expand relationships between the two countries, as well as strengthen co-operation and collaboration on safety and security of their seafarers will continue, as the two governments announced in Colombia on September 17.

Confirmation of the cooperation between the countries on the sidelines of the IMO annual General Council Parallel Event held in Cartagena de Indias, came in the form of a joint communique established by the two countries’s ministers of Transport, Mr Fikile Mbalula for South Africa, and Ms Ángela María Orozco for Colombia.

The two ministers highlighted that central to their continued discussions was the formalization through formal ratification of two cooperation instruments, a Bilateral Air Services Agreement (BASA) and an Agreement for Mutual Recognition of Seafarers Certificates between South Africa and Colombia.

In the joint communique’, Mr. Mbalula and Ms. Orozco confirmed that:

They also reinstated their commitment to collaborate on additional bilateral relation and cooperation on significant issues discussed at the Parallel Event to a new level. For this reason, the Ministers agreed to stand ready to enhance mutual consultations for the conclusion of the current negotiations of the Bilateral Air Services Agreement (BASA).

The Ministers also agreed that a BASA will improve trade and cultural exchanges between the two countries.

In addition, the Ministers welcomed the interest expressed by both countries to negotiate an 'Agreement for Mutual Recognition of Seafarers Certificates for Negotiation between South Africa and Colombia'.

In the meantime, the South African Maritime Safety Authority (SAMSA) confirmed that it entered into an agreement with its Colombian counterpart, the Directorate of the Maritime (DIMAR), regarding a declaration of intent to establish a framework for institutional cooperation on matters of mutual interest between the two Maritime Authorities.

The draft of the declaration of intent between SAMSA and DIMAR notes that the two organisations 'within the scope of competence of the respective Parties, and in recognition of international instruments in which South Africa and Colombia are parties to and the international organizations of which they are members, the main areas and forms of cooperation that the framework would include are the following':