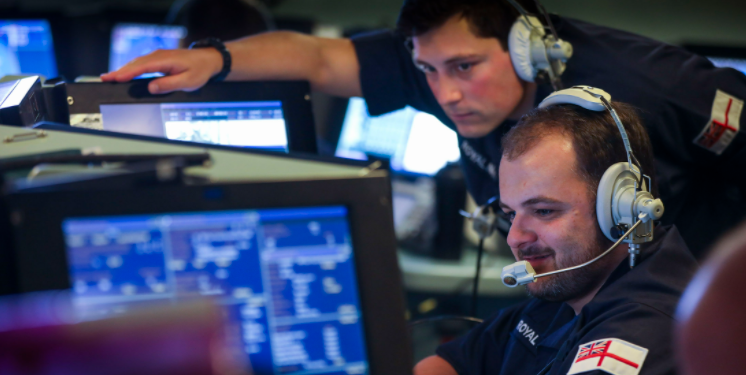 The Royal Navy is using artificial intelligence for the first time at sea in a bid to defeat missile attacks.

Leading-edge software is being tested at sea against live missiles during the largest exercise of its type off the coasts of Scotland and Norway.

Involving more than 3,000 military personnel, Formidable Shield tests the ability of NATO warships to detect, track and defeat incoming missiles, from sea-skimming weapons travelling at twice the speed of sound just above the waterline, to ballistic missiles.

HMS Lancaster and Dragon are trialing artificial intelligence and machine learning applications which offer a glimpse of the future of air defence at sea.

Experts from the Government’s defence laboratory Dstl and industry partners from Roke, CGI and BAE Systems are using the three-week exercise to test their ‘Startle’ and ‘Sycoiea’ systems.

Startle is designed to help ease the load on sailors monitoring the ‘air picture’ in the operations room by providing real-time recommendations and alerts.

Sycoiea builds upon this and is at the forefront of automated Platform and Force Threat Evaluation Weapon assignment, effectively allowing operations room teams to identify incoming missiles and advise on the best weapon to deal with them more quickly than even the most experienced operator.

Although experiments with AI have been conducted before, this is the first time it’s been tested against live missiles, said Lancaster’s Weapon Engineer Officer Lieutenant Commander Adam Leveridge.

“Observing Startle and Sycoiea augment the human warfighter in real time against a live supersonic missile threat was truly impressive – a glimpse into our highly-autonomous future.”

Alasdair Gilchrist, programme manager for Dstl said it was “imperative” that Britain continued to invest in the combat systems installed on Royal Navy warships to ensure they meet present and future challenges.

“Being able to bring get the AI onto the ships is a massive achievement, and while we can prove the AI works in the labs, actually getting Navy personnel hands on is brilliant,” he said.

Lancaster’s Commanding Officer Will Blackett said the scale of Formidable Shield and the assets and technology involved – the latest drones, leading-edge missile systems and sensors – coupled with the best-trained sailors, scientists and technicians made the exercise a hugely-beneficial experience for all.

“The scale of this endeavour is remarkable – NATO can bring some serious firepower to bear when it needs to and it is exciting to be part of the development of future tactics and equipment,” he added.

While Lancaster and Dragon trial technologies brand new to the Fleet, Argyll (the first ship in the Navy to be fitted with the Sea Ceptor air defence missile) has been testing upgraded software and developing tactics to push the limits of her Artisan Radar and Sea Ceptor as part of a task group.

“The sheer weight of hardware bought together in this exercise, and the chance to test the teams and systems against real-speed supersonic sea skimming and ballistic targets cannot be underestimated,” said Lieutenant Commander Richard Dobson, HMS Argyll’s Principal Warfare Officer.

“It has built the confidence of the team, pushed the boundaries of what these highly capable systems can do, and will help develop our future tactics in missile defence.”

Taking a quick break from dodging missiles the three Royal Navy ships found time to form up for a navigational exercise, demonstrating their ability to operate in close proximity to one another whilst conducting flying sorties with a Wildcat helicopter.