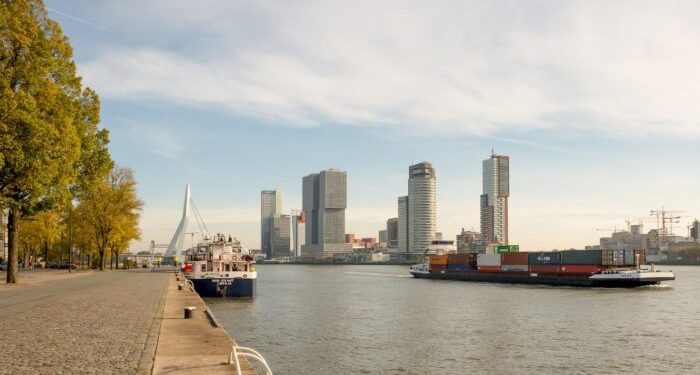 The municipality of Rotterdam and the Port of Rotterdam Authority launched a pilot project which focuses on a variety of mobile shore-based power solutions for sea-going vessels and announced that five commercial parties are selected for the project; ENGIE Ventures & Integrated Solutions BV; PON Power & its subsidiaries; Aggreko Benelux; Mobiele Stroom BV and JP Energy Systems.

The pilot project begins in autumn and will run until spring.

Overall, see-going vessels need electric power when calling a port; Most of the times, electric power is generated by the auxiliary engines which leads to emissions and noise pollution. Thus, the noise pollution can be decreased by shutting down the vessel’s auxiliary engines and providing it with external power, shore-based power, aka ‘power-to-ship’.

The five selected participants will be testing a variety of concepts, focusing on their technical and commercial viability, user-friendliness and positive environmental impact.

Each system will be installed for 2 to 4 weeks at a location halfway along Parkkade, where it will supply shore-based power to sea-going vessels mooring at a specific berth. During the tests, researchers will perform measurements to determine the reduction of noise and emissions achieved by the different systems, compared to the vessel’s on-board generator.

Also, the project will be located at the public berths for sea-going vessels on Parkkade, close to Rotterdam’s city centre.

After completing Phase A, the researchers intend to immediately move on to its follow-up, Phase B. which will mainly focus on arranging shore-based power for larger sea-going vessels.

Following the port’s development, the Authority recently announced the launch of a new app to reduce burden and improve efficiency of bunkering operations. Earlier in 2019, a pilot project at the ECT Delta Terminal, operated by Hutchison Ports ECT Rotterdam (ECT), indicated that this ‘single point of truth’ can lead to significant improvements.