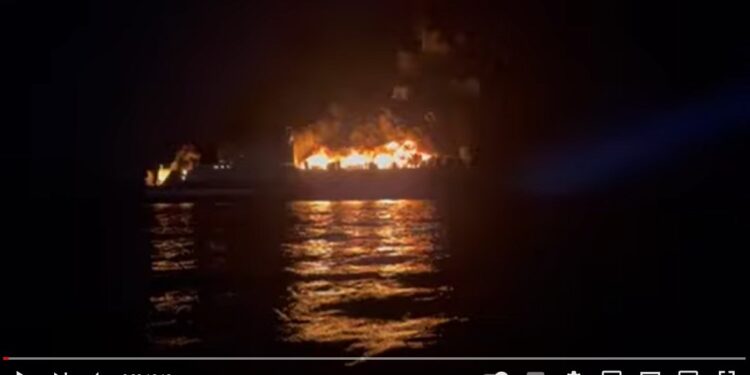 A Grimaldi roro carrying 239 passengers and 51 crew caught fire off Corfu on January 18, leading to an evacuation effort, with first information reporting 10 missing.

The fire broke out onboard the Euroferry Olympia, while it was sailing off Corfu, when an alarm sounded, beginning an evacuation operation.

The passengers abandoned the ship and got into life rafts, before being picked up by nearby ships. According to local media, one person was slightly injured, while the rescue operation went smoothly, as the weather was helpful.

Nevertheless, there is information claiming that 10 are missing, as after the first counting, 280 persons were accounted for, out of the total 290.

While this information is not verified, Grimaldi told Greek media that they are trying to establish how many were onboard the ship, and how many were rescued.

The survivors are currently on their way of arriving at Kerkyra, where the Coast Guard will once again count them, so as to have a clear picture about possible missing people.

In the meantime, search and rescue operation at the sea is continuing. According to some passengers, they are afraid because they claim that some drivers were asleep in their trucks.

What is more, the fire is considered to have started from the garage, while explosions also took place, with the crew swiftly taking action to protect the passengers.