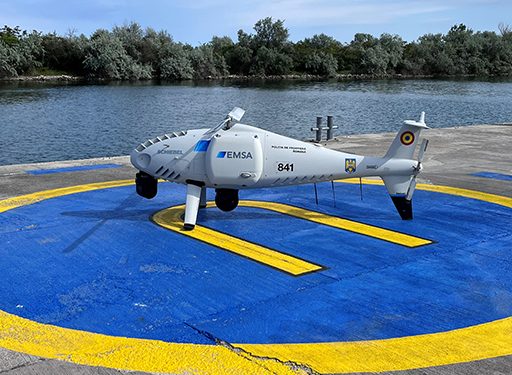 Romanian national authorities have been using EMSA RPAS to conduct flights over the Black Sea region from a base in Mangalia.

The flights are offering enhanced maritime surveillance to the country’s Border Police, Naval Authority and National Agency for Fishing and Aquaculture.

The day-to-day monitoring provided by the remotely piloted aircraft is particularly useful for the implementation of coast guard functions where getting a clear picture of what is happening at sea helps enable an efficient and effective response.

The request for the service was placed by the Romanian Border Police following successful operations in 2021 and is expected to run until the end of the summer.

The flights performed will enhance surveillance for multiple purposes including general maritime safety such as vessel traffic management, ship and port security, pollution detection, accident and disaster response, and fisheries inspection and control, all within Romanian territorial waters and exclusive economic zone.

The RPAS in use is an unmanned helicopter with an endurance of six hours and a range of more than 100km. It is being provided through EMSA’s contractor, Schiebel Aircraft GmbH.

The aircraft – the S100 Camcopter – is also equipped with both an optical and infrared camera, as well as an AIS receiver and an automated maritime search sensor capable of detecting objects on the sea surface.

Thanks to the dedicated platform of the EMSA RPAS Data Centre, the end users of the service can communicate with each other and respond to the flight data shared with them in real time.

In this way, depending on their various roles and responsibilities, the authorities can pick up and act on any activity at sea which might be considered harmful, dangerous or unlawful in a targeted and well-coordinated manner.