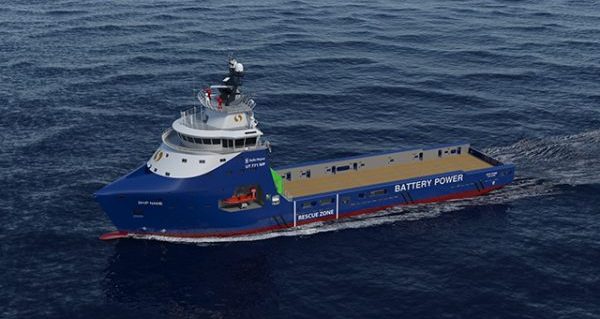 Rolls-Royce announced that it has received an order to provide a battery-powered energy system for six offshore vessels (PSV’s) which have been built by the yard Cosco Guangdong in China.

The delivery includes the Energy Storage Container System (ESSU), an upgrade of the existing Rolls-Royce ship design engineering package to match the new features, an upgrade of the Dynamic Positioning system (DP) and the ACON control system, and the new Rolls-Royce Energy Monitoring system, which provides an overview of energy usage onboard.

Rolls-Royce has also delivered ship equipment and systems to the vessels being environmentally upgraded. The order for the six offshore vessels follows deliveries or orders for battery systems for seven other vessels.

SEACOSCO is set to receive seven of the PSVs in 2018 and one in 2019. Thus, the Shipyard will store the PSVs at their facility for six to 18 months. The storage period can be shortened by mutual agreement.

The ships were ordered in 2013 and 2014 and SEACOSCO decided to provide six of them with an environmental upgrade, with an option for a further two.

Asbjørn Skaro, Director Digital & Systems – Commercial Marine, Rolls-Royce, said: “We are looking forward to seeing these great vessels in operation and invested in for the future. These are advanced and modern ships, and we strongly believe that the new energy system onboard will make them stand out from the crowd in the market. They will receive an upgrade that benefits both the environment and the economic efficiency of the ships.”