RMI issued an investigation report on a fatal fall onboard the container ship AL RAWDAH in January 2019. The report stressed issues associated with poor SMS implementation and lack of safety harness.

The RMI-registered AL RAWDAH was at berth at Port Des Galets Container Terminal in l’île de La Réunion, in the Indian Ocean, on 30 January 2019.

While replacing a damaged impeller for the No. 5 Starboard Engine Room ventilation fan, the Wiper fell into an open fan duct, about 20 m to the bottom.

The crew of AL RAWDAH attempted to lift him out of the duct by stretcher, but were unable to remove him.

A shoreside rescue team boarded the ship and removed the Wiper from the duct. He was unresponsive with no pulse.

They gave him a cardiopulmonary resuscitation (CPR), but the Wiper was pronounced deceased.

The exact cause of the Wiper’s fall cannot be determined since there were no direct witnesses. However, investigators presume the Wiper lost his balance while working.

Causal factors, which likely contributed to the fatality, include:

(a) failure to comply with the Company’s SMS requirement to complete a PTW in any situation where there was a risk of falling more than 2 m;

(b) failure to utilize a safety harness by the Wiper while working in the vicinity of the open duct; and

(c) failure to utilize a safety grating over the top of the duct when safety harnesses were not used.

In response to this serious casualty, the company has taken the following actions: 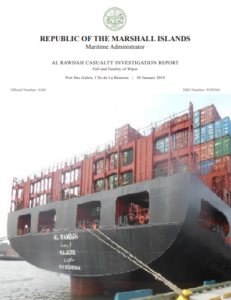