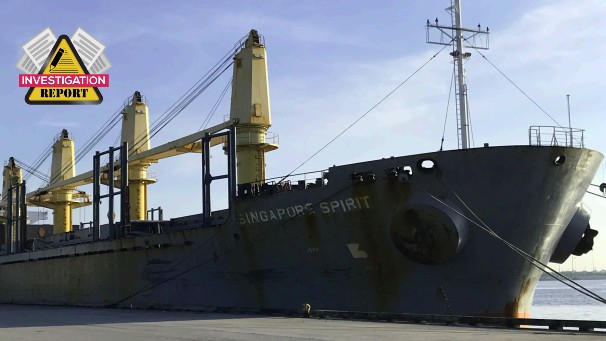 RMI issued an investigation report on the fatality of a crew member onboard the cargo ship Singapore Spirit while underway, in March 2020. The seafarer was working alone in a cargo hold at the time of the incident. The investigation highlighted non-compliance with the enclosed space entry procedures.

On 15 March 2020, the RMI-registered multipurpose dry cargo SINGAPORE SPIRIT was underway from Ilhéus, Brazil to Las Palmas, Canary Islands fully loaded with a cargo of logs.

The work planned for that day was the inspection and periodic maintenance of the No. 4 port water ballast tank (WBT) control valve located inside a void space accessible from the trunking for Cargo Hold No. 5 port side ladder.

In preparation for the planned work, the Chief Officer directed opening the access hatch to the ladder.

Later that day, the Bosun tasked the Able Seafarer Deck (ASD) 1 to place wood pieces near the cargo hold ladder entrance. The wood was necessary to construct a working platform below the void space manhole. The ASD2 was tasked with notifying the ASD1 it was the end of the workday.

He went to Cargo Hold No. 5 and found the ASD1 lying on the first platform within the cargo hold, along with several wood pieces. The ASD1 had been working alone at the time.

The ASD2 immediately climbed into the trunk, without wearing a self-contained breathing apparatus (SCBA), to rescue the ASD1 who was found not breathing and had no pulse. However, the ASD2 was unable to carry him up the ladder. The ASD2 then exited the trunk and notified the Officer on Watch (OOW), who raised the alarm.

Available crewmembers mustered at the entrance to the cargo hold access ladder with the equipment needed to carry out an enclosed space rescue. The Bosun, wearing an SCBA, climbed down to the ASD1 and fitted a safety harness on him. After a line was attached, other crewmembers hoisted the ASD1 to the deck. Once on deck, the crewmembers immediately started CPR, but the Master subsequently pronounced the ASD1 deceased.

Causal factors which may have contributed to this very serious marine casualty include:

(a) the ASD1 falling from the cargo hold access ladder in the trunk during an unauthorized entry presumably due to:

(b) non-compliance with the enclosed space entry procedures by failing to:

(c) the location of the void space manhole inside the Cargo Hold access ladder trunk, that required constructing a working platform to access it;

An additional identified issue, which did not contribute to this incident, was the improper initial enclosed space rescue attempt where the necessary precautions were not taken.

In response to this very serious marine casualty, the company has taken the following preventive actions:

Following conclusions of the investigation, RMI recommends that the Company: