In its weekly report for 8-14 September, ReCAAP ISC informed of two incidents of armed robbery against ships in Asia. Of the two incidents, one was a CAT 3 incident onboard a chemical tanker while anchored at Dumai Anchorage, Indonesia. The other was a CAT 4 incident onboard a bulk carrier anchored at Taboneo Anchorage, Indonesia.

While anchored at Dumai Anchorage, Indonesia, the duty watchman on routine rounds noticed four perpetrators armed with knives on poop deck. They were trying to open the hatch for emergency towing arrangements.

The duty watchman informed the bridge and the alarm was raised. All non-essential crew were mustered in the citadel. The perpetrators escaped upon hearing the alarm. The crew was not injured and nothing was stolen. The Coast Guard boarded the ship for investigation thereafter. 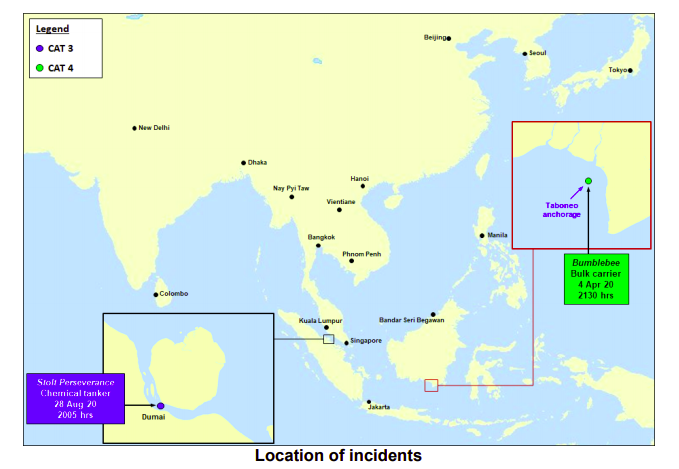 Initial checks by the crew revealed that the perpetrators had boarded the bulk carrier through the anchor chain and had tampered with the hawse pipe grille in order to board the ship.

At about 2300 hrs, the port security officials boarded the ship for investigation. The crew was not injured.