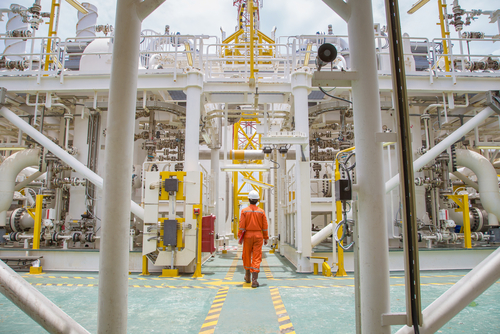 A team from the World Maritime University (WMU) launched a report, focusing on the systemic failures in the implementation of the regulatory regime for seafarers’ hours of work and rest, undermining the credibility of international regulations relating to working hours.

Specifically, the analysis indicates that insufficient manning is the root cause of violations especially during peak workload conditions. Imbalance between workload and manning levels indicate that flag States do not always fulfil responsibilities, nor do they ensure that shipowners carry out theirs with due regard to efficient and sufficient manning levels on board ships.

Moreover, the anxiety of the consequences that may follow after failing inspections and creating problems for shipping companies outweighs the obligation to genuinely comply with international regulations. Employment insecurity accompanied by financial incentives contributes to an environment where adjustment instead of accuracy is the logical outcome. For seafarers, the sole objective of recording hours is to confirm compliance and avoid disruptions to the schedule.

The report notes that "they are trapped in cognitive dissonance, where deviance is normalized." Many companies appear disinterested in seafarers feedback on this issue and flag State surveys are limited to reviewing paperwork with no verification of the reality of work on board. Inevitably the effectiveness of the International Safety Management (ISM) Code must be questioned.

Concerning enforcement mechanisms stablished through port State control, inspectors recognized that they rarely checked the accuracy of the records which are taken on face value. While the system of regulation relies on port State control for enforcement, incentives to accommodate are given priority rather than questioning the veracity of records.

The authors of ‘A culture of adjustment’ propose three significant areas for urgent attention:

It seems that all stakeholders are aware of the problems but lack the authority or willingness to address the root causes.

The report observes that a key debate among participants was whether the current regulatory framework is fit for purpose in terms of determining manning levels that ensure vessels are sufficiently and efficiently manned. The reason behind this notion is as follows: excessive working hours are facilitated by the regulations currently in place, which in their letter allow for extreme practices such as the 6 hours on/6 hours off arrangements and has led to a normalization of deviance in the standard references for hours of work and rest. The result has been that crew onboard are not guaranteed the scientifically-verified amount of rest needed to function properly as humans and to be fit for duty in an extremely high-risk environment.

In short, shipping remains reactive and reluctant to change. Limited resources, commercial pressure, a blame culture and an apparent divide between ship and shore are some of the barriers to effective implementation of existing instruments, which lead seafarers to take matters into their own hands by adjusting records (and not work and rest patterns) to appear to have no violations.

Recording malpractices are widespread and recognised as such by industry stakeholders, the public sector and administrations. The culture of under-reporting or adjusting records extends beyond that of work/rest hours, to the PMS, and other SMS compliance-based paperwork. The traditional navigational documents seem less affected as they have not been imposed from the outside.

Fear (of unemployment) and reward (bonuses) as well as a ‘can-do’ culture are major drivers of seafarers manipulating records. This is to avoid unpleasant consequences, queries and sanctions from their employers or third-party inspectors. The reality remains that seafarers are not getting the rest that is reasonably to be expected for safe operation in a high-risk work context and for their health and wellbeing.

Considering the magnitude of the problem of fatigue at sea and multiplicity of indisputable research evidence, PSC action and mediation seem trivial. This may indicate that priorities in PSC inspections remain the technical parts of shipping (the hardware) and not issues relating to labour (the liveware).

This is in stark contrast to the data confirming that the human element contributes to most casualties and to the findings of the concentrated inspection campaign (CIC) on STCW rest hours, for example that of the Tokyo MoU which found that 62.7% of the CIC-specific deficiencies related directly to record-keeping.

All this provides concrete evidence of a poor level of compliance with regards to the work/rest hour record-keeping requirements and also a poor PSC response. The only exception to the latter, relates to when CICs on rest hours are carried out.

Alarmingly, it seems that there is a growing culture of systemic acceptance of the existence of violations and recording malpractices by seafarers, companies and authorities. - the report notes

The continuous failure of authorities, companies and seafarers to implement work/rest hours regulations suggests systemic failures with origins in:

• the reluctance of certain flag States to address manning levels and strictly enforce work/rest hours regulations based on a desire to maintain competitive advantage;

• the inability of port State regimes to implement and develop effective monitoring systems to ensure the accuracy of records and eliminate violations;

• the disinclination of many companies to accept unpleasant feedback from ships and take appropriate measures to enhance manning levels and reduce fatigue; and,

• the unwillingness to report accurately from seafarers often due to fear or overwork but also because such record-keeping is seen as a pointless and risky exercise when properly undertaken.

Furthermore, the research reveals that stakeholders do not have incentive or any advantage to comply. Therefore, at present there is limited possibility to promote implementation and enforcement if the barriers are not suppressed and compliance incentivised.

In summary, without disrupting the current incentive regime, there will be a continuous failure in the implementation and enforcement work/rest hour regulations.

Finally, the report includes many recommendation for all maritime stakeholder to address this important issue. For example, among many, it is important for the regulators, maritime education and training institutions, professional organizations, trade unions, and shipping industry organizations (including P&I Clubs and insurance entities) to initiate and strengthen programmes on human factors for seafarers and shore managers (including DPAs).  Such programmes should create substantive awareness of the importance of maintaining accurate work/rest hour records and seeking, ascertaining and using feedback.

What is more, the maritime and labour communities should debate using ethical, fair and efficient sanctions or other measures as a last resort to address systematic violations and recording malpractices. Any form of sanctions should additionally focus on those who hold power to determine manning quantity and quality. Further research to assess and identify options to overcome the detrimental impacts of adverse working conditions and victimisation for accurate recording and feedback should be initiated. The mechanisms and practices that engender fear and hinder trustworthy recording as well as impact seafarers’ mental health should be researched and counter-measures proposed and implemented.

Explore more by clicking on the WMU report herebelow 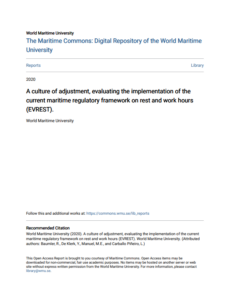