The British Ports Association (BPA) issued a report compiling some examples of community and stakeholder initiatives across UK ports, in a bid to highlight the work ports are doing to benefit their communities.

Ports are critical to the UK economy, handling 95% of UK trade and directly employing over 115,000 people. These jobs and the economic activity generated by ports is also incredibly valuable to local economies, too.

However, few people are aware of the additional work that many ports are doing to support their local communities.

As such, the publication provides examples of some of the ways that ports can lift their communities over and above just providing employment and acting as an economic enabler.

Ports are often rightly regarded as key features of regional and national economic significance. Their local community impact is, however, often overlooked, but ports frequently go above and beyond their primary function to reinforce and increase the positive impact they can have on their local communities in numerous ways. This report will hopefully encourage the sharing of ideas within the sector while serving to alter perspectives outside of the port industry by offering examples of the many fantastic community initiatives that are being undertaken,

A vast range of initiatives and projects were submitted, ranging from the Port of Dover’s Community Fund, which now supports 50 local organisations with 76 individual projects, or the Port of Blyth’s STEM Hub, a major initiative set up to engage young people with the local career opportunities in the offshore energy sector.

Another example is the Port of Tyne’s partnership with local school breakfast clubs, which ensure hundreds of children go to school well-fed.

Other examples include Ullapool’s inclusivity and accessibility project in the heart of the village and Cornwall Council Harbour’s initiative to support the safety of local fishermen.

Traditionally, the UK’s network of trust ports have a natural link to their port users and stakeholders, as well as established mechanisms for engaging with their community and local planners. However, in recent years, the wider ports sector has made a concerted effort to reach out to the community. Being a good neighbour is not only the right thing for a port to do, but this has also helped ports to communicate their strategies to key audiences and decision makers, 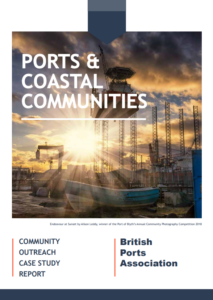