Report highlights the importance of inland waterways to US economy

The US National Grain and Feed Association (NGFA) and Waterways Council, Inc. (WCI) today commended the U.S. Department of Agriculture (USDA) for releasing a significant new study that quantifies the cost-savings and competitive advantages that would increase investments in long-delayed improvements to inland waterways locks and dams on the Upper Mississippi and Illinois River system.

The study 'Importance of Inland Waterways to U.S. Agriculture' addresses the important connection between the inland waterways and the competitiveness of American agriculture in global markets.

Some of the highlights of the study include the following:

Commenting on the study, WCI President and CEO Mike Toohey, said that it underscores the inland waterways as a conduit to US’s agriculture competitiveness, as well as to overall US economic prosperity.

We believe the study makes the case to expedite the Navigation and Ecosystem Sustainability Program (NESP) that would modernize five locks on the Upper Mississippi River and two on the Illinois Waterway to be ready to capitalize on predicted grain shipments, while at the same time improving the health of our marine ecosystems and habitats

In addition, NGFA President and CEO Randy Gordon, mentioned that the study quantifies the important cost of further delays in rebuilding US’s inland waterway infrastructure. He explained that foreign competition from countries like Brazil is only increasing given current trade disruptions, while China is investing aggressively in South America’s transportation infrastructure to the United States’ detriment. 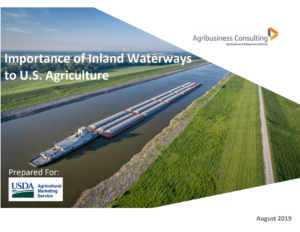