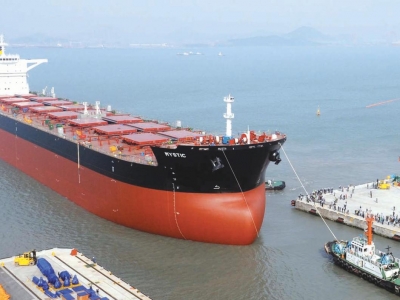 By the West of England P&I Club

By the West of England P&I Club

The West of England P&I Club has posted on its website a reminder for the Amendments to the International Maritime Solid Bulk Cargoes (IMSBC) Code as follows:

On 20 May 2011 the International Maritime Organisation's (IMO's) Maritime Safety Committee at its eighty-ninth session adopted Resolution MSC.(318)89 regarding amendments to the International Maritime Solid Bulk Cargoes (IMSBC) Code. Contracting governments have been able to apply the new requirements, in whole or in part, on a voluntary basis since 1 January 2012. Compliance with the amendments will become mandatory on 1 January 2013.

As a result of changes in world trade, new solid bulk cargoes with their own particular hazards are often introduced and presented for shipment. Similarly, some cargoes that were previously only shipped in very limited quantities and were not included in the IMSBC Code are now carried more extensively. At the same time, expert understanding of the properties and hazards associated with established solid bulk cargoes and the safest means of handling and carrying such cargoes is continually being advanced. Therefore to keep pace with developments the IMSBC Code will in future be updated bi-annually.

Amendment 01-11 follows a review of numerous submissions to IMO by the sub-committee on Dangerous Goods, Solid Bulk Cargoes and Containers (DSC). The principal changes are summarised below:

- The hazards associated with Brown Coal Briquettes have been amended to state that in addition to being easily ignited, igniting spontaneously, and possibly depleting the oxygen level inside a cargo space, the cargo is also liable to heat spontaneously.

- When carrying Ferrophosphorus (including briquettes), suitable gas detectors are to be provided on board for the measurement of flammable and toxic gases during the voyage.

- Due to the extremely high density of Ferrosilicon (with 25% to 30% silicon, or 90% or more silicon), additional guidance on the need to ensure that tanktops are not overstressed has been added to the schedule.

- In a number of schedules, references to the "Competent Authority" have been replaced with the word "Administration" regarding the verification of the gas tightness of bulkheads and the safety of the cargo hold bilge pumping arrangements. This change has been introduced as the permanent nature of these structures mean they fall within the ambit of the flag state and should be verified by the Administration at the building stage or during modification, rather than by a Competent Authority prior to loading.

- Many of the schedules covering nitrate cargoes have been amended to include a warning under the "Precautions" section advising that "The master and officers are to note that the ship's fixed gas fire-fighting installation will be ineffective on fires involving this cargo and that applying copious amounts of water may be necessary."

- Nineteen cargo schedules now include additional guidance advising that the material is "hygroscopic and may cake in overhangs, impairing safety during discharge".

- In addition, a number of new cargo schedules have been added:

- The schedule for Wood Pulp Pellets has been deleted from the Code.

- In Appendix 3, Castor Beans and Sodium Nitrate have been removed from the list of cargoes that are non-cohesive when dry, and the following cargoes have been added to the list:

Members are reminded to ensure that their vessels comply with the amendments to the IMSBC Code as from 1 January 2013 if they are not already doing so in whole or in part in accordance with flag state requirements.