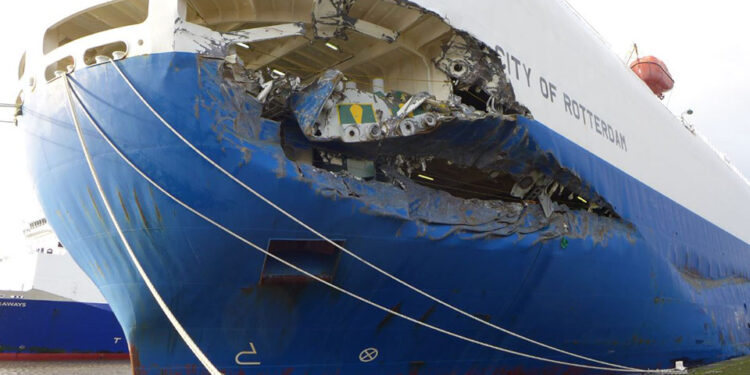 On 3 December 2015 the Panama registered pure car carrier City of Rotterdam collided with the Danish registered ro-ro ferry Primula Seaways on the River Humber. Both vessels were damaged but made their way to Immingham without assistance. There was no pollution and there were no serious injuries.

Findings
The MAIB investigation identified that the outbound City of Rotterdam had been set to the northern side of the navigable channel and into the path of the inbound ferry, but this had not been corrected because the pilot on board had become disoriented after looking through an off-axis window on the semi-circular shaped bridge. The car carrier was of an unconventional design and his disorientation was due to ‘relative motion illusion’, which caused the pilot to think that the vessel was travelling in the direction in which he was looking.

Consequently, the pilot’s actions, which were designed to manoeuvre the car carrier towards the south side of the channel, were ineffective. That the pilot’s error was allowed to escalate the developing close quarters situation to the point of collision was due to: intervention by City of Rotterdam’s master was too late, and the challenges to the pilot’s actions by Primula Seaways’ bridge team and the Humber Vessel Traffic Service being insufficiently robust. Although Primula Seaways started to reduce speed about 2 minutes before the collision, a more substantial reduction in speed was warranted.

Following the accident, and an early MAIB recommendation, action has been taken by Fairmont Shipping (Canada) Limited, City of Rotterdam’s managers, to reduce the likelihood of relative motion illusion and to improve the bridge resource management of its deck officers.

Action has also been taken by Associated British Ports, the harbour authority for the River Humber, to confirm the competency of the pilot and the suitability of Primula Seaways’ master to hold a pilotage exemption certificate.

Recommendations
Bureau Veritas, City of Rotterdam’s classification society, has been recommended to propose measures to the International Association of Classification Societies that are aimed at raising the awareness of relative motion illusion and promoting the need for naval architects and shipbuilders to adhere to internationally accepted ergonomic principles for bridge design.

Further details may be found in the report herebelow